Anniversary Preview: A Death, a Baptism, and a Famine 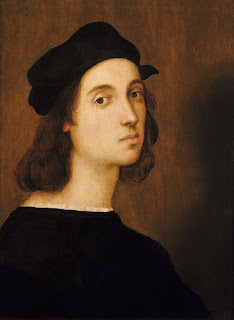 Italy Magazine has a nicely illustrated story about many exhibitions in Italy and beyond commemorating Raphael's early death 500 years ago on April 6, 1520:

The artist Raffaello Sanzio—better known as Raphael—is one of the undisputed masters of the High Renaissance style in Italy. But when you realize that the artist died on his 37th birthday, the range and quantity of Raphael’s artistic achievements seem nothing short of astonishing.

2020 marks the 500th anniversary of the artist’s death, and, similar to museum exhibitions and celebrations surrounding Leonardo da Vinci’s anniversary in 2019, Raphael will be the star of the show this year.

In addition to his artistic talent, Raphael was known for his good looks, his popularity with the ladies, and his courtly manners—probably honed at the ducal palace of Urbino, where Raphael’s father was employed as a court painter.

The Phaidon website explains why Raphael achieved greatness in a great period of art history: 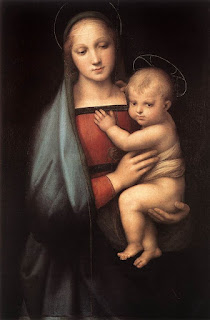 As Bette Talvacchia, distinguished professor of art history at Connecticut University writes in our updated Phaidon classic Raphael: "His art never fails to engage the viewer's imagination, whether through the mesmerizing, graceful beauty of his Madonnas, the perfection of his classicizing forms, or the inescapable pull of his narrative scenes." Or, as Gombrich puts it, “some of his best works give us a glimpse into a world more serene and harmonious than our own.”

Moreover his working practices gave rise to that perverse, yet unusually common quality found among those who really strive hard: he made his labours look effortless. As Gombrich puts it, “Raphael’s greatest paintings seem so effortless that one does not usually connect them with the idea of hard and relentless work.” . . .

More strikingly, when grouping figures together, Raphael managed to achieve a level of harmony unseen before; when decorating the Vatican with his frescos, he gave rooms both a diversity and an accord of imagery.

Before his death, on his birthday at the tender age of 37, he had bested his contemporaries in at least on regard. “Just as Michelangelo was found to have reached the highest peak in the mastery of the human body, Raphael was seen to have accomplished what the older generation had striven so hard to achieve: the perfect and harmonious composition of freely moving figures.” 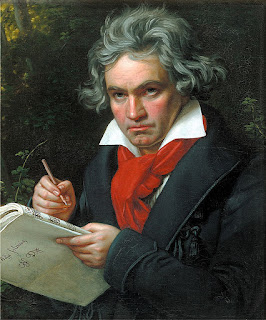 Beethoven was born and raised in Bonn, the city on the Rhine. He was baptized Ludwig van Beethoven in Bonn’s St. Remigius Church on December 17, 1770; his birth date was very likely December 16. His parents were Johann and Maria Magdalena Leym née Keverich. Married in 1767, the couple had seven children, although only three survived infancy: Ludwig, Kaspar Karl (baptized April 8, 1774) and Nikolaus Johann (baptized October 2, 1776).

The celebration has already begun:

The anniversary year will officially begin on December 16, 2019. From that point until December 17, 2020, Bonn and the region will host various special projects alongside the main events like the "Beethoven-Bürgerfest" (people's party) and two phases of Bonn's Beethovenfest.

According to Christian Lorenz, artistic director of the Beethoven Anniversary Society, Ludwig van Beethoven's artistic approach means the composer should not only resonate with lovers of classical music.

"As an individual, ‘modern' artist, Beethoven targeted society, in fact humanity as a whole. His musical expression of a utopia where people live together in peace is appealing," Lorenz explained.

In Beethoven's own words: "Freedom, progress, is purpose in the art world as in universal creation."

Ludwig van Beethoven (1770-1827) is one of the most significant and influential composers of the western art music tradition. He was a ground-breaker, in all senses. He oversaw the transition of music from the Classical style, full of poise and balance, to the Romantic style, characterised by emotion and impact.

A prolific composer who wrote for wealthy patrons and also earned money from public concerts, he wrote nine symphonies, 32 piano sonatas, one opera, five piano concertos, and many chamber works including some ground-breaking string quartets. He could be a difficult and unsociable man, who felt bitter and isolated by the deafness which developed in his 20s; he never married.

He enjoyed great success and recognition in his lifetime. It is said that at the premiere of his Ninth, he could not hear the thunderous applause at the end, and had to be turned round to see the delighted audience reaction.

Virtually all his major works are standard repertoire pieces, familiar to musicians and listeners throughout the commercial world.

In 2027, the 200th anniversary of his death will also be celebrated in Bonn, Germany and Vienna, Austria, the city of his birth and the city where he died, respectively. 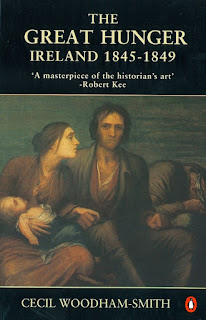 This year also marks the 175th anniversary of the beginning of the Irish Potato Famine.

The Irish Potato Famine Exhibition in Dublin describes some of the issues:

The Irish Potato Famine is also referred to as The Great Hunger, a period of mass death from starvation and disease between 1845 and 1852. This exhibition tells the story of what happened and why.

After centuries of British colonial rule, a large section of the Irish population lived in extreme poverty and depended on the potato as their main (and often their only) food source for survival.

Centuries of British invasions, land confiscations and anti-catholic laws had reduced the country and it's people to levels of poverty not seen in other parts of Europe.

At the same time, Britain was booming and in the throes of the industrial revolution. Ireland (forcibly) was part of the United Kingdom at this time and might have expected to benefit accordingly. But this was not to be. . . .

Massive humanitarian aid was required, and quickly. Instead the British Government chose piecemeal and slowly. Their overriding concern was not to disrupt market forces, and food continued to be exported to Britain as the Irish starved. They raised taxes and washed their hands of the crisis when it was still only half way through.

The Great Hunger devastated Ireland. At least a million died, perhaps even 1.5 million...we will never know the true figure. Millions more were forced to feel the country. The population of the island has never recovered. From a population of between 8 and 9 million in 1845, a steady decline ensued for the next century and a half as other European populations grew. 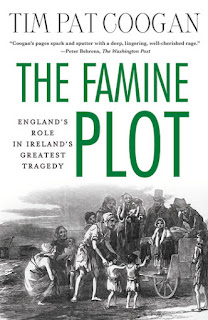 Queen Victoria's government wanted to make Ireland more like England: it instituted Poor Laws, Workhouses, and maintained the use of Ireland as the breadbasket of wheat and corn and grains for England's use and trade. Cecil Woodham-Smith's history of the famine, The Great Hunger: Ireland 1845-1849 is a classic view; she was born in Wales in a famous Irish family, the Fitzgerald's, but she married an Englishman. Her book is measured in its evaluation of British response to the Irish Potato Famine, and places blame on certain persons and policies, but Tim Pat Coogan's book, The Famine Plot: England's Role in Ireland's Greatest Tragedy,  accuses the British government of deliberate genocide. He is a Dublin-born Irish historian and journalist.

It is certainly a most controversial topic: when the PBS Masterpiece Theater program Victoria set an episode in the midst of the Famine, IrishCentral.com corrected some of the impressions given that the Queen had real sympathy and concern for the plight of the Catholic peasants in Ireland:

Many commended the episode for finally portraying the devastating horrors of the Irish famine on British TV screens for the first time. Much praise was heaped onto screenwriter Daisy Goodwin for not shying away from the rather unpalatable role played that the British landlords and government played in the disaster. However, the portrayal of Queen Victoria, quite commonly known as The Famine Queen throughout Ireland and who was depicted as berating her government ministers for not doing enough to help the Irish, did draw some criticism.

“There is no evidence that she had any real compassion for the Irish people in any way,” said historian Christine Kinealy, founding director of Ireland's Great Hunger Institute at Quinnipiac University.
Posted by Stephanie A. Mann at 12:00 AM