Reginald Pole and Last Session of the Council of Trent 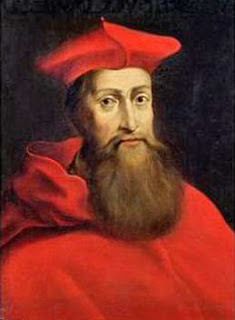 Found when looking for something else*: a presentation on Reginald Cardinal Pole's works published for the Council of Trent by the Aldine Press in 1562: De Concilio liber and Reformatio Angliae.

Reginald Cardinal Pole, the last Catholic Archbishop of Canterbury, was dead of course (+11/27/1558) when Pope Pius IV convened the last session of Council of Trent. Pole had died under the cloud of suspicion of heresy during the reign of Pope Paul IV, who had stripped him of his title as Papal Legate. Mary I showed some of her father's spirit in responding to Papal authority and had not permitted Pole to leave England for Rome to face those charges. Others in Pole's circle, like Giovanni Cardinal Morone, suffered imprisonment and interrogation by the Roman Inquisition. According to the Catholic Encyclopedia, he was vindicated after his arrest, imprisonment, and investigation:

[He] was arrested by the pontiff's order, confined in the Castle of Saint Angelo (31 May, 1557), and made the object of a formal prosecution for heresy, in which his views on justification, the invocation of saints, the veneration of relics and other matters were incriminated and submitted to rigid inquiry.

The cardinal strenuously repudiated these charges, but he was kept in confinement until the death of Paul IV. In 1560 his successor Pius IV authorized a revision of the process against Morone, and as a result the imprisonment of the cardinal and the whole procedure against him were declared to be entirely without justification; the judgment also recorded in the most formal terms that not the least suspicion rested upon his orthodoxy.

As H. George Fletcher comments in his presentation, publication of Pole's Book of the Council, written for the first session of the Council of Trent in 1542, 20 years earlier, and the records of Legatine Council he had held in England to begin the re-establishment and the reforms of the Catholic Church, was meant to offer a "posthumous vindication" of Pole's life and work for the Church.

In both Eamon Duffy's presentation on Cardinal Pole and H. George Fletcher's, Pope Paul IV does not come off well. Even the Catholic Encyclopedia calls his pontificate a great disappointment.

Fletcher's presentation, made at the Grolier Club in 2015, offers some narrative on Pole's life and and works, but is mostly concerned with his acquisition of one of the books published by the Aldine Press in 1562 and whether it could be a copy sent to the last session of the Council of Trent and used by a peritus assisting one of the delegates there.

*Oh, what was I looking for? Some more information about this image.
Posted by Stephanie A. Mann at 12:30 AM