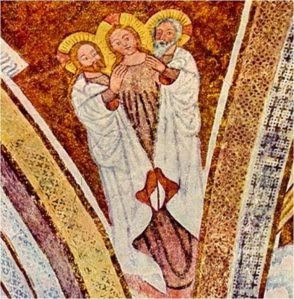 Writing about St. James in Urschalling, near Prien am Chiemsee in The Wall Street Journal, H. George Fletcher comments on one of its most famous pieces of art, and the persistent error about what it depicts:

The single outstanding feature is described as a depiction of the Trinity, the triune rendition of one God in three divine persons, a depiction reportedly unique in art history, conforming to neither Eastern nor Western Christian iconography. In a diminishing triangular segment on the north side of the interior dome of the apse, between two ribs of the arches, three figures stand side by side, initially distinct and in seeming equivalence. The bodies of the figures begin to combine as they fill the long shield-shaped section that ends in a point, finally merging. The Trinity is conventionally shown as a seated God the Father, holding the crucified Christ, with the dove of the Holy Spirit hovering above. Here, there is a white-robed, white-bearded elderly man to the viewer's right, a white-robed, dark-bearded younger man to the left, and between them, a brown-robed, smooth-faced figure with long, flowing brown locks framing the face. Each is distinguished with a nimbus.

Its importance and fame notwithstanding, there is a considerable problem in identifying this depiction as the Trinity, because it is not the Trinity at all, but rather the reception of the Virgin in Paradise. Mary is welcomed and flanked by God the Father and God the Son, her own son, their respective outside arms embracing her protectively. It is entirely logical to find this above the altar, continuing the Mariology of other murals. The directly opposite southern section of the dome contains the Madonna and Child. An erroneous conclusion at an earlier date has been perpetuated, and this proof by progressive assertion, as a mentor of mine used to say, has canonized the "Trinity" painting as the most significant of the murals. It ought not to remain misidentified. It can stand on its own terms as an early and important vision of the female—indeed, of the female—in Christian iconography.

Despite its historical importance, St. James, Urschalling seems to have garnered only German-language attention and study. It greatly deserves to be far more widely known and visited.

I would like to know more about how this image has been misinterpreted and why Mr. Fletcher is so certain his view is correct. Neither interpretation seems to rest on a common iconography--he outlines the usual imagery for the Trinity, and while the Assumption of the Blessed Virgin Mary and the Coronation of the Blessed Virgin Mary are common images, the "reception of the Virgin in Paradise" is not an image I've seen.
Posted by Stephanie A. Mann at 12:30 AM