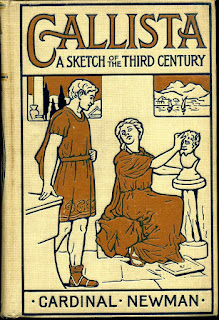 As promised, I'll be on the Son Rise Morning Show bright and early this morning (6:50 a.m. Central/ 7:50 a.m. Eastern) to talk with Anna Mitchell about Newman and Literature, focusing today on the wide range of Newman's literary output.

If we survey Newman's literary works--not forgetting the four great books he wrote (the Apologia pro Vita Sua; The Idea of the University; the Essay on the Development of Doctrine; the Grammar of Assent)--we see a great variety. He wrote book reviews, poetry, novels, hymns, saint's lives, historical essays, sermons, speeches, presentations, essays, tracts, prefaces; he translated Latin hymns and works of the Fathers of the Church, etc. He edited his books, reworked them years after their first publication, dedicated them to friends of many years. (His other novel, Callista: A Sketch of the Third Century, is also a conversion story, but in the midst of martyrdom in Roman North Africa--and features St. Cyprian of Carthage!)

Newman's command of literary genres is masterful. As Father Ian Ker commented years ago, he can be brutally satirical as in The Present Position of Catholics in England in which he sends up the English tradition of anti-Catholicism while lampooning the English claim that tradition doesn't bind them: they are reasonable, skeptical, fact-finding men who have accepted the tradition that Catholics are ignorant, superstitious, and under priestly control without evidence, without ever having met or talked to a Catholic in their lives, based on what someone else told them and what everyone has always said:

If you asked the first person you met why he believed that our religion was so baneful and odious, he would not say, "I have had good proofs of it;" or, "I know Catholics too well to doubt it;" or, "I am well read in history, and I can vouch for it;" or, "I have lived such a long time in Catholic countries, I ought to know;"—(of course, I do not mean that no one would make such a reply, but I mean that it would not be the reply of the mass of men; far from it). No; single out a man from the multitude, and he would say something of this sort: "I am sure it is;" he will look significant, and say, "You will find it a hard job to make me think otherwise;" or he will look wise and say, "I can make a pretty good guess how things go on among you;" or he will be angry, and cry out, "Those fellows, the priests, I would not believe them, though they swore themselves black in the face;" or he will speak loudly, and overbear and drown all remonstrance: "It is too notorious for proof; every one knows it; every book says it; it has been so ruled long ago. It is rather too much in the nineteenth century to be told to begin history again, and to have to reverse our elementary facts." That is, in other words, the multitude of men hate Catholicism mainly on tradition, there being few, indeed, who have made fact and argument the primary or the supplemental grounds of their aversion to it. And observe, they hate it on a single, isolated tradition, not a complex, conclusive tradition—not the united tradition of many places. It is true, indeed, that Holland, and Geneva, and Prussia, each has its own tradition against the Catholic Church; but our countrymen do in no sense believe, from any judgment they form on those united British and foreign traditions, but from the tradition of their own nation alone; which, though certainly it comprises millions of souls, nevertheless, is so intimately one by the continual intercourse and mutual communication of part with part, that it cannot with any fairness be considered to contain a number of separate testimonies, but only one. Yet this meagre evidence, I say, suffices to produce in the men of this generation an enthusiastic, undoubting and energetic persuasion that we torture heretics, immure nuns, sell licences to sin, and are plotting against kings and governments; all, I say, because this was said of Catholics when they were boys. It is the old heirloom, the family picture, which is at once their informant and their proof. 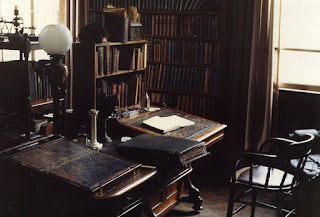 Or he can be rhapsodic, as in this praise of his patron St. Philip Neri, in presenting the example of a good man in contrast to the fascination of sin and evil in fiction:

Philip preferred, as he expressed it, tranquilly to cast in his net to gain them; he preferred to yield to the stream, and direct the current, which he could not stop, of science, literature, art, and fashion, and to sweeten and to sanctify what God had made very good and man had spoilt.

And so he contemplated as the idea of his mission, not the propagation of the faith, nor the exposition of doctrine, nor the catechetical schools; whatever was exact and systematic pleased him not; he put from him monastic rule and authoritative speech, as David refused the armour of his king. No; he would be but an ordinary individual priest as others: and his weapons should be but unaffected humility and unpretending love. All he did was to be done by the light, and fervour, and convincing eloquence of his personal character and his easy conversation. He came to the Eternal City and he sat himself down there, and his home and his family gradually grew up around him, by the spontaneous accession of materials from without. He did not so much seek his own as draw them to him.

This post would be as long as one of Newman's paragraphs (or sentences) if I went on to describe all his command of literary style and persuasive argument, all the beauty and power of his prose, etc. So just one more genre: poetry.

Newman would have to be considered a minor poet, but as a minor poet, he's had a significant impact in Catholic (and Anglican) hymnography, with three poems turned into hymns ("Lead, Kindly Light", "Praise to the Holiest", "Firmly I Believe and Truly"). The first is probably the most famous, set to various hymn tunes:
LEAD, Kindly Light, amid the encircling gloom          Lead Thou me on!The night is dark, and I am far from home—          Lead Thou me on!Keep Thou my feet; I do not ask to see

Pride ruled my will: remember not past years.

Which I have loved long since, and lost awhile.

Even the Mormon Tabernacle Choir appreciates Newman's poem in their sensitive performance of the John B. Dykes setting of the hymn I've linked above!

One of his longer poems, The Dream of Gerontius, was extraordinarily popular in its day--and was used by Sir Edward Elgar as the text for his oratorio of the same name. In a couple of weeks Matt Swaim and I will discuss it and its theme of the Four Last Things: Death, Judgment, Heaven, and Hell. (Anna Mitchell is preparing to go on maternity leave!)
Posted by Stephanie A. Mann at 12:00 AM