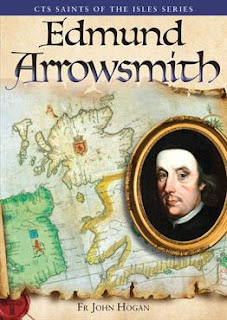 Saint Edmund Arrowsmith, SJ, is one of the 40 Martyrs of England and Wales. From the Jesuits in Britain:

Edmund Arrowsmith was born in Lancashire in 1585.  His mother was a member of the Gerard family – prominent recusants who included Fr John Gerard and Bl Miles Gerard.  His parents were imprisoned for adherence to the faith and he and his siblings were taken in by neighbours.

In 1605 he enrolled at the English College, Douai.  He was ordained at Arras in December 1612, returning to Lancashire the following year to carry out priestly ministry in secret.  Stonyhurst College still holds the small trunk of vestments and equipment which he carried from house to house.  He was arrested in 1622, but released the following year on an amnesty from King James. He joined the Jesuits in 1624.
In 1628 Edmund was betrayed to the authorities and was convicted of being a Roman Catholic priest.  He was hanged, drawn and quartered at Lancaster on 28th August, now his feast day.
Edmund was beatified in 1929 and canonized as one of the Forty Martyrs by Pope Paul VI in1970. His hand was preserved by his family and it now rests in the Church of St Oswald and St Edmund Arrowsmith, Ashton-in-Makerfield.
That parish hosts an annual pilgrimage Mass to venerate the martyr's Holy Hand (it was held on Sunday, August 25 this year)!
His last words were "O Bone Jesu!" (O Good Jesus!), the first words of a sequence of psalms attributed to St. Bernard of Clairvaux, sung here by The Sixteen in Robert Parson's Latin motet:
O good Jesus.
Give light to my eyes, or I will sleep in death, and my enemy will say, ‘I have overcome him.’ O Lord.
Into your hands I commit my spirit: deliver me, Lord God of truth. O Messiah.
I have spoken: Lord, make me know my end. O Holy One.
And what is the number of my days: that I may know what is lacking in me. O my God.
You have broken my bonds: I will offer you the sacrifice of praise and call on the name of our Lord. O Emmanuel.
I have no refuge; no one cares for my life. O Christ.
I have cried to you, O Lord, I have said, ‘You are my hope, my portion in the land of the living.’ O our King.
Give me a sign of your goodness, that my enemies may see it and be put to shame, for you, Lord, have helped me and comforted me. O teacher.
You have let the light of your face shine on us: you have filled my heart with joy. Amen.
St. Edmund Arrowsmith, pray for us!
Posted by Stephanie A. Mann at 12:00 AM