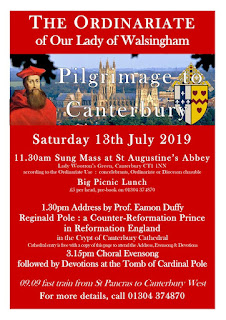 Eamon Duffy, who included a chapter on Reginald Cardinal Pole, the last Catholic Archbishop of Canterbury in his 2017 Reformation Divided:Catholics, Protestants and the Conversion of England, presented a lecture for the Ordinariate's pilgrimage to Canterbury last Saturday, July 13. There's a video/audio recording of his talk uploaded here.

One of the interesting aspects of his talk is that he calls for a new biography of Reginald Pole in spite of the fact that the late Thomas F. Mayer of Augustana College wrote a biography, Reginald Pole: Prince and Prophet, published by Cambridge University Press in 2000 and now available in paperback:

This is the first biography in ninety years of Reginald Pole (1500-1558), one of the most important international figures of the sixteenth century. Pole's career is followed as protege; and then harshest critic of Henry VIII, as cardinal and papal diplomat, legate of Viterbo, a nearly successful candidate for pope, and finally as legate to England, archbishop of Canterbury, architect of the English Counter-Reformation, and victim of both Pope Paul IV and of himself. 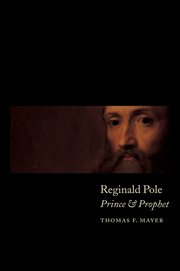 So why does Duffy want a new biography--or perhaps one that's more accessible (price!)--than this recent effort?

Duffy's main issue is that Mayer has no sympathy for his subject: he did not like Reginald Cardinal Pole and Duffy says it shows: in fact, Duffy states, Mayer "loathed Pole"! Duffy also cites Mayer's entry for Pole in the new Dictionary of National Biography, noting the same problem.

Duffy believes that Reginald Pole was "a holy man; a troubled man" and that Mayer judges him too harshly. Mayer thought he was a hypocrite and a sham! Duffy opines that Mayer's biography of Pole is "dense" and "elusive" as this review seems to agree:

Pole's life was lived in a number of contexts; he was a cousin of Henry VIII, a major figure in the European reform, and Mary's advisor and archbishop of Canterbury. In addition to his many roles, however, Mayer argues that Pole's biography is complicated by the nature of the sources about and by him. Pole was a prolific writer, but refused the appellation, arguing that he never wrote to publish. Partly for this reason, the authorship of works attributed to him, and his circle, is confused. Further, Pole and his contemporaries wrote and rewrote his life story, both during his life and after his death. As a result of all of this textual revision, Mayer argues that "Pole always existed in two phases, the life as lived and the life as written" (p. 3). Rather than trying to evade this difficulty, Mayer has chosen to build his biography around it, giving equal focus to the texts and the man, and hoping that the juxtaposition will help to explain both. This ambitious aim has spawned more than simply the biography, which stands as the keystone to an entire Polian edifice.[2] . . .

This is not an easy book. For those who are not already familiar with the broad outlines of Pole's life, it may be difficult to follow.[3] This biography is concerned with drawing the links that lie below the surface of such a narrative, setting Pole's life in the nest of his relationships with people like Contarini, Morone, Priuli, Bembo, Carafa and Vittoria Colonna. An astonishing amount of work has gone into tracing those networks, and the density of the narrative can be dizzying at times. However, it provides a remarkable richness of context, and allows Mayer to draw a character of formidable complexity. He paints a picture of Pole as an influential thinker, a conscientious and tolerant reformer, a warm and sustaining friend and a prolific writer who was, admittedly, a bad diplomat and politician. Mayer concludes that "Pole had greatness thrust upon him and it missed" (p. 439); what strikes the reader is how effectively Pole avoided greatness. He was placed in numerous positions of influence, importance and opportunity, and regularly fled them, only to be offered another chance. Mayer argues that Pole "succeeded best in private away from the public stage" (p. 442), but given his birth, his education, and the times, it seems that Pole never had the option of privacy.

Although it's not a complete biography by any means, I think Philip Hughes' analysis of Reginald Cardinal Pole's role in the Catholic Counter-Reformation and the revival of Catholicism in England in his book Rome and the Counter-Reformation in England is masterful. Hughes notes Pole's strengths and weaknesses, as I commented in my review a couple of years ago:

Hughes covered three periods of the efforts to revive, save, and restore Catholicism in England after the reigns of Henry VIII and Edward VI:

looking first at the Marian efforts to re-establish the Catholic Church with the papacy and hierarchy in England (during the reign of Mary I), then the long recusant period of missionaries, martyrs, and hopes of political conquest (during the reign of Elizabeth I), and finally the divisive disasters of the effort to bring on-site leadership to the clergy and the laity with the Archpriest controversy and the Bishops of Chalcedon failures (during the reigns of James I and Charles I).

Rome and the Counter-Reformation in England is divided into three parts, one for the leading figure of the eras described above: 1) Reginald Cardinal Pole; 2) William Cardinal Allen; 3) Richard Smith, Bishop of Chalcedon. For each man Hughes provides an insightful character sketch and analysis, noting his strengths and weaknesses. Those strengths and weaknesses contribute, of course, to each man's successes and failures.

Of Reginald Pole, Hughes demonstrates that for all his knowledge and love of Jesus and His Church, he lacked "irascible passion"; he was too ready to be a victim--and that he had "a temperament that instinctively turned from the hard, unpleasant realities of a problem to the ideal way in which it ought to be solved." (p. 43) Although Pole was a man of action and ready to promote reform and renewal, Hughes claims that he lacked audacity: he was not bold and he could not be stirred to righteous anger. Therefore, he wasn't able to take crucial action in a crisis. Nevertheless, Hughes does not blame the failure of the Marian revival and re-establishment of the Catholic Church in England on Pole's character; he acknowledges that time was the main factor. Mary and Pole died too soon to effect a long-lasting Catholic revival. They left great resources for Catholicism in England, however, in the good bishops they'd appointed, but they left also left the disastrous legacy of the burnings of Smithfield to the memory of Protestants in England. Unlike Eamon Duffy, who proposed that the prosecution of heretics was working in Fires of Faith, Hughes notes that even this effort was made ineffective by the too early deaths of Mary and Pole, especially without a Catholic heir. The other great legacy Mary and Pole left to Catholics in England was William Allen.
Posted by Stephanie A. Mann at 12:30 AM