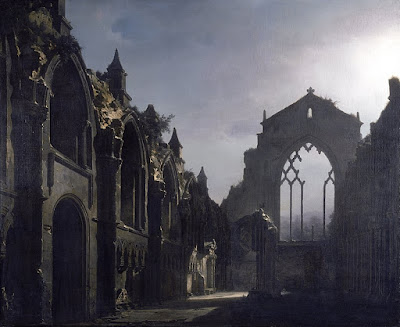 After describing the history of Holyrood Abbey yesterday, I added the story of how Felix Mendelssohn was inspired to write the Scottish Symphony after visiting the ruins:


Felix Mendelssohn was inspired by his visit to Holyrood Abbey's ruins to compose his third symphony, The Scottish Symphony. This website transcribes his impressions of the ruins:

It is clear from Mendelssohn’s letters even before their tour that he intended to write a symphony based on his Scottish experiences and the opening of the work came to him on the evening of 31st July 1829 when "In the evening twilight we went today to the palace where Queen Mary lived and loved; a little room is shown there with a winding staircase leading up to the door; up this way they came and found Rizzio in that little room, pulled him out, and three rooms off there is a dark corner, where they murdered him. The chapel close to it is now roofless; grass and ivy grow there, and at that broken altar Mary was crowned Queen of Scotland. Everything around is broken and mouldering, and the bright sky shines in. I believe I found today in that old chapel the beginning of my Scottish Symphony."

When I listen to the symphony thinking of Mary, Queen of Scots' life and adventures, joys and sorrows, controversies and sad end, it creates the most dramatic images in my mind. The same would apply to Margaret Tudor, married, widowed, remarried, etc!

The ruins of Holyrood Abbey also inspired the artist Louis Daguerre to create both a painting and diorama. The Walker Art Gallery in Liverpool describes these works:

Daguerre's fascination with dioramas stemmed from his interest in finding appropriate ways of capturing light and atmospheric effects in painting, as well as making perspective an expressive and dramatic medium. The increasing taste for travelling and particularly visiting ruins and picturesque sites in the 18th century made Daguerre's dioramas particularly popular among the people of his time. For those who did not have the chance to travel, dioramas offered an experience close to a real visit, while for the privileged it helped revive their memories and emotions.

'The Ruins of Holyrood Chapel' relates to the painting with the same title, which Daguerre exhibited at the Paris Salon in 1824. The only difference between the two was that the Paris Salon work included the figure of a comtess (sic), who was visiting the tomb of her former friend, the Duchesse de Grammont. She died in exile at Holyrood in 1803 and was buried in the royal vault in the south-east corner of Holyrood Chapel. Daguerre exhibited dioramas of the same subject in Paris from 1823 until 1824, in London from March 1825 and in Liverpool from 1825 until 1827. Between 1822 and 1839 Daguerre exhibited twenty dioramas in Paris and three of the scenes exhibited were related to Edinburgh ('Interior of Holyrood Chapel', Roslyn Chapel near Edinburgh and 'Edinburgh during the Fire of 15 November 1824'). There is no record of Daguerre's visit to the Chapel although the view by moonlight of the Holyrood Chapel was famous.

The diorama of this scene was exhibited in Regent's Park, London, in 1825 and inspired the poet Letitia Elizabeth Landon to compose this poem, "Holyrood":

The moonlight fell like pity o'er the walls
And broken arches, which the conqueror, Time
Had rode unto destruction; the grey moss,
A silver cloak, hung lightly o'er the ruins;
And nothing came upon the soul but soft,
Sad images. And this was once a palace,
Where the rich viol answered to the lute,
And maidens flung the flowers from their hair
Till the halls swam with perfume: here the dance
Kept time with light harps, and yet lighter feet;
And here the beautiful Mary kept her court,
Where sighs and smiles made her regality,
And dreamed not of the long and many years
When the heart was to waste itself away
In hope, whose anxiousness was as a curse:
Here, royal in her beauty and her power,
The prison and the scaffold, could they be
But things whose very name was not for her!
And this, now fallen sanctuary, how oft
Have hymns and incense made it holiness;
How oft, perhaps, at the low midnight hour,
lts once fair mistress may have stolen to pour
At its pure altar, thoughts which have no vent,
But deep and silent prayer; when the heart finds

That it may not suffice unto itself,
But seeks communion with that other state,
Whose mystery to it is as a shroud
In which it may conceal its strife of thought,
And find repose.⁠.⁠.⁠.⁠.⁠.⁠.
.⁠.⁠.⁠.⁠But it is utterly changed:
No incense rises, save some chance wild-flower
Breathes grateful to the air; no hymn is heard,
No sound, but the bat's melancholy wings;
And all is desolate, and solitude.
And thus it is with links of destiny:
Clay fastens on with gold—and none may tell
What the chain's next unravelling will be
Alas, the mockeries in which fate delights!
Alas, for time!—still more, alas, for change!

So now you can read the poem, look at the painting, and listen to the Scottish Symphony, and imagine "beautiful Mary" keeping her court, dancing and singing, praying in the chapel, all unaware of her fate.
Posted by Stephanie A. Mann at 12:30 AM