"The Function and Purpose of Every Fragment" 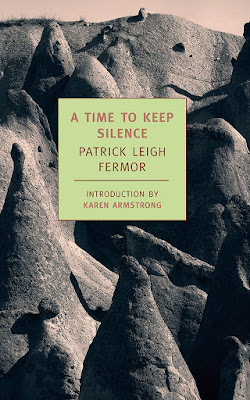 On a not so recent visit to Eighth Day Books, I noticed stacks of books by Patrick Leigh Fermor and picked up this one about his visits to monasteries, especially to the Abbey of Saint Wandrille de Fontenelle, and La Trappe Abbey (aka La Grande Trappe). Fermor is renowned as a travel writer and the New York Review of Books publishes excellent editions of his works:

Patrick Leigh Fermor (1915–2011) was an intrepid traveler and a heroic soldier who is widely considered to be one of the finest travel writers of the twentieth century. After his stormy school days, followed by the walk across Europe to Constantinople that begins in A Time of Gifts (1977) and continues through Between the Woods and the Water (1986) and The Broken Road (published posthumously in 2013), he lived and traveled in the Balkans and the Greek archipelago. His books A Time to Keep Silence (1957), Mani (1958) and Roumeli (1966) attest to his deep interest in languages and remote places. In the Second World War he joined the Irish Guards, became a liaison officer in Albania, and fought in Greece and Crete. He was awarded the DSO and OBE. Leigh Fermor lived partly in Greece—in the house he designed with his wife, Joan, in an olive grove in the Mani—and partly in Worcestershire. In 2004 he was knighted for his services to literature and to British–Greek relations. Artemis Cooper’s biography, Patrick Leigh Fermor: An Adventure, was published by New York Review Books in 2013. Author photo: Patrick Leigh Fermor.

Warren Farha's recommendation notwithstanding, what really convinced me to buy the book was this section, quoted in the author's original Introduction to the 1957 edition of A Time to Keep Silence (reissued in 1987). He was referring to the impressions made on a traveler by the ruins of monasteries in Cappadocia and then he comments: 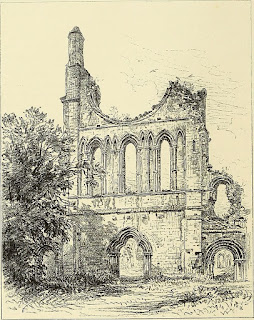 But, for us in the West, because of all such relics they are the most compelling mementos of the life that once animated them, the ruined abbeys of England that have remained desolate since the Reformation will always be the most moving and tragic. For there is no riddle here. We know the function and purpose of every fragment and the exact details of the holy life that should be sheltering there. We know, too, the miserable and wanton story of their destruction and their dereliction, and have only to close our eyes for a second for the imagination to rebuild the towers and the pinnacles and summon to our ears the quiet rumour of monkish activity and the sounds of bells melted long ago. They emerge in the fields like the peaks of a vanished Atlantis drowned four centuries deep. The gutted cloisters stand uselessly among the furrows and only broken pillars mark the former symmetry of the aisles and ambulatories. Surrounded by elder-flower, with their bases entangled in bracken and blueberry and bridged at their summits with arches and broken spandrels that fly spinning over the tree-tops in slender trajectories, the clustering pillars suspend the great empty circumference of a rose-window in the rook-haunted sky. It is as though some tremendous Gregorian chant has been interrupted hundreds of years ago to hang there petrified at its climax ever since. 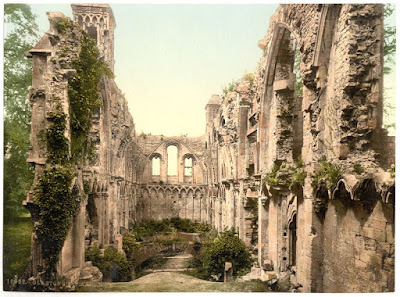 The grounds of the abbeys, through the efforts of the National Trust and other organizations, are all cleaned up now. Fermor's evocative, alliterative prose depicts a more unkempt vision of the ruins, more like these vintage images of Byland and Fountains abbeys.

In the chapters on the Benedictine Abbey of  Saint Wandrille de Fontenelle, and the Trappist La Trappe Abbey in France, Fermor demonstrates great sympathy and admiration of the monks. He stays as a guest in both houses for some time and gets used to the rhythm of the Rule through his observation and limited participation. While he is astonished by the strictness of the Trappist rule, he accepts the consolations that those monks allowed to converse with him describe. He enjoys the silence and the freedom he experiences in Saint Wandrille and Solesmes (which he barely describes because he found staying there so much like staying at Saint Wandrille); after having a hard time at the beginning getting used to the silence and the solitude, when he leaves and rejoins the busy modern world of Paris, he misses the monastery peace.

He manages to seem something more than a visitor or a mere observer. Through his contacts with the monks who interact with guests he goes beyond curiosity to acceptance. Therefore he defends the monks against the charges of uselessness and seeking escape from the world. In fact, Fermor almost seems to contradict the statement that Chesterton made in his essay "Why I am a Catholic"; at least in the monastic orders the Catholic Church has developed and approved, Fermor is "just to the Catholic Church" without feeling "a tug toward it":

He admires those who personify the monastic ideal and honors them through his admiration, but he does not imitate them. He goes to Paris and checks into the Hotel La Louisiane on the Rue de la Seine and soon gets used to the noise and distractions.

He also visits the rock monasteries of Cappadocia, Turkey, commenting on the mysteries of their origins and their abandonment, their sculptured architecture and the remains of frescoes and signs of monastic life and worship.

Then Fermor concludes with a appreciation of the new monasteries in England, established after the French Revolution and Catholic Emancipation, and finally with the "humanity and simplicity" of St. Basil of Caesarea.

Some of those phrases from his description of abbey ruins in England echo in my heart:

--the miserable and wanton story of their destruction and their dereliction
--the sounds of bells melted long ago
--like the peaks of a vanished Atlantis drowned four centuries deep
--the clustering pillars suspend the great empty circumference of a rose-window in the rook-haunted sky
--some tremendous Gregorian chant has been interrupted hundreds of years ago to hang there petrified at its climax ever since.

When I read that last line it reminded me of the Unfinished Vespers of St. Thomas a Becket almost 370 years before the last monasteries were suppressed and dispersed, cut off as the soldiers attacked the Archbishop of Canterbury.
Posted by Stephanie A. Mann at 12:30 AM