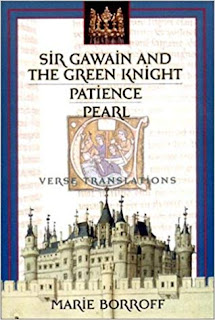 The penultimate work on our Christendom Academy reading list is Sir Gawain and the Green Knight. Since I still have my two volume Norton anthology of English literature, I am reading the Marie Borroff translation. J.R.R. Tolkien also translated this poem from its Middle English Midlands dialect. The British Library has the only manuscript that survives (as far as we know now), which also includes three other poems: Patience, Pearl, and Cleanness. Simon Armitage, another recent translator, describes the provenance of this manuscript in the British Library collection:

We know next to nothing about the author of the poem which has come to be called Sir Gawain and the Green Knight. It was probably written around 1400. In the early 17th century the manuscript was recorded as belonging to a Yorkshireman, Henry Saville of Bank. It was later acquired by Sir Robert Cotton, whose collection also included the Lindisfarne Gospels and the only surviving manuscript of Beowulf . The poem then lay dormant for over 200 years, not coming to light until Queen Victoria was on the throne, thus leapfrogging the attentions of some of our greatest writers and critics. The manuscript, a small, unprepossessing thing, would fit comfortably into an average-size hand, were anyone actually allowed to touch it. Now referred to as Cotton Nero A X, it is considered not only a most brilliant example of Middle English poetry but also as one of the jewels in the crown of English Literature; it now sits in the British Library under conditions of high security and controlled humidity.

To cast eyes on the manuscript, or even to shuffle the unbound pages of the Early English Text Society's facsimile edition, is to be intrigued by the handwriting: stern, stylish letters, like crusading chess pieces, fall into orderly ranks along faintly ruled lines. But the man whose calligraphy we ponder, a jobbing scribe probably, was not the author. The person who has become known as the Gawain poet remains as shadowy as the pages themselves. Among many other reasons, it is partly this anonymity which has made the poem so attractive to latter-day translators. The lack of definitive authorship seems to serve as an invitation, opening up a space within the poem for a new writer to occupy. Its comparatively recent rediscovery acts as a further draw; if Milton or Pope had put their stamp on it, or if Dr Johnson had offered an opinion, or if Keats or Coleridge or Wordsworth had drawn it into their orbit, such an invitation might now appear less forthcoming. . . .

Please read the rest, and view the illustrations from the manuscript, there.

As I was reading--aloud--Sir Gawain and the Green Knight in Marie Borroff's translation, I looked her up and discovered that she died on July 5 at the age of 95. Yale University, where she taught as Sterling Professor of English, provided this tribute:

“Marie Borroff will be remembered not only because of her place in Yale history but because she exemplified excellence and demonstrated an unwavering commitment to the university’s mission,” says Peter Salovey, ’86 Ph.D., President of Yale and Chris Argyris Professor of Psychology. “A superb scholar, dedicated educator, and exemplary community citizen, she mentored scores of students and made critical contributions on and beyond our campus through her writing, translation, and teaching. Yale mourns the passing of one of its greats.”

Professor Borroff was born in New York City the daughter of professional musicians Marie Bergerson and Raymond Borroff. The family moved to Chicago in 1941, and it was there that she received an undergraduate degree and an M.A. from the University of Chicago. Later, she earned a doctorate in English literature and philology from Yale. She began her teaching career at Smith College, and in 1959 became the first woman appointed to Yale’s Department of English. In 1965 she was appointed as a professor of English, making her one of the first two women granted tenure in any department of Yale’s Faculty of Arts and Sciences, and in 1991 she became the first woman to be named a Sterling Professor, the highest honor bestowed on a Yale faculty member.

A scholar of medieval and Anglo Saxon literature and philologist by training, Professor Borroff extended her scholarship and teaching to what she called “the language of poetry and the poetry of language.” Her critical book-length studies, “Sir Gawain and the Green Knight: A Stylistic and Metrical Study” (1962) and “Language and the Poet: Verbal Artistry in Frost, Stevens and Moore” (1979), received accolades, as did her many articles and editions on the history of the language and modern poets.

“Marie held the whole history of English poetry in her mind and shared it with generation after generation of Yale students,” says Langdon Hammer, the Neil Gray Jr. professor of English and chair of the Department of English at Yale.

A poignant line from the end of the obituary: "Her death signals the end of an age."

An age of scholarship and beauty, of reverence for the past, and dedication to excellence, I presume. Not an age of political correctness, doxxing, and deconstruction!

Here is a poem she wrote titled "Understanding Poetry."