May 4, Feast of the Catholic Martyrs of England and Wales 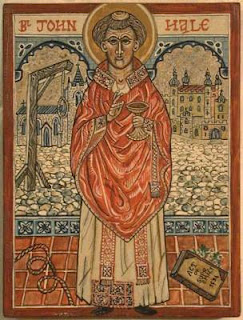 Today is the great feast honoring all of the Catholic Martyrs of the English Reformation--those canonized by Pope Paul VI and those beatified by Popes John Paul II, Pius XI, and Leo XIII--This feast was moved to this date in 2000 with a new liturgical calendar for the dioceses of England and Wales approved by the Vatican; then in 2010 it was elevated to a Feast (not just a Memorial). Moving it to May 4 meant that the feast is celebrated on the anniversary of the protomartyrs of the English Reformation, the Priors of the Carthusian order, a parish priest, and the confessor and chaplain of the Brigittine order at Syon Abbey. These five men, St. John Houghton, St. Augustine Webster, St. Robert Lawrence, Blessed John Haile, and St. Richard Reynolds, were brutally executed at Tyburn before a crowd of Court witnesses. Some sources even suggest that Henry VIII was there in disguise. Drawn on hurdles from the Tower of London (whence St. Thomas More saw them depart), they were hung and quartered while still alive.

Of the five, Blessed John Haile is much less known.This site, also the source of the icon depicted above, describes the circumstances of this parish priest's arrest and trial:

Blessed John Haile was the fourth Catholic who was murdered by Henry VIII in the year 1535, Vicar of Isleworth, or Thistleworth as it was then called, he was the first priest of the secular clergy who suffered in the cause of the Catholic religion. A fellow-priest named Feron or Fern, of Teddington, who was a young man, was his principal confidant. Haile complained to him in bitter terms of the King's cruelty in oppressing and spoiling the Church, declared that he was a heretic, compared him to the worst princes who had ever governed the country, and enlarged on the notorious vices of his private life, on his repudiation of Queen Catherine and his taking to himself " a wife of fornication."
All this was expressed by Haile in the most vehement and unmeasured language, and was taken down by Feron on paper. This memorandum was the so-called "slanderous bill" on which the martyr was tried and condemned to death.
Sentence of high treason was pronounced on both Haile and Feron. The latter received a pardon, and perhaps the same would have been extended to Haile, had his submission been deemed satisfactory by the Council. A more glorious end was before him, and he had the supreme honour of being numbered as the fourth of that holy company of martyrs who suffered for the Catholic Faith at Tyburn on the 4th of May, 1535.

I have posted about the Carthusians and St. Richard Reynolds before, and am glad to highlight this great martyr as well; he would not accept that his monarch could co-opt the position of Jesus Christ's Vicar on Earth--a position that Jesus Christ had founded and assigned to St. Peter and his successors! Remember that I am on the Son Rise Morning Show this morning and will talk about this feast of the Catholic Martyrs of England and Wales in the context of the great 20th century persecution of Catholicism in Mexico, which Graham Greene compared to the Elizabethan recusant era in England.
Posted by Stephanie A. Mann at 2:06 AM