Theme and Narration: A Book Review 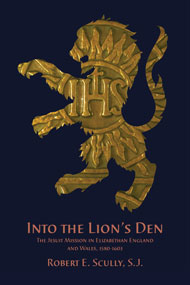 Into the Lion's Den: The Jesuit Mission in Elizabethan England and Wales, 1580-1603 by Robert E. Scully, SJ, published by The Institute of Jesuit Sources (St. Louis, Missouri), c. 2011.

List of Illustrations and A Map
Abbreviations, Acronyms, and Initialisms
Introduction
Chapter 1. The Jesuit Mission: Its Background and Organizational Framework
Chapter 2: "The Enterprise is Begun": Launching and Sustaining the Mission
Chapter 3. Questions of Priorities: The Geography and Social Topography of Catholic Evangelization
Chapter 4. Elizabethan Wales: A Unique Challenge and Opportunity
Chapter 5. Behind Closed Doors: Jesuits and Their Clandestine Ministries
Chapter 6. Elizabethan Catholic Women: Their Indispensable Role in Sustaining the Catholic Community
Chapter 7. Religion and Politics: The Jesuit Mission and the Elizabethan Government
Chapter 8. The Shadow of Death: Persecution, Prison Life, Exile and Execution
Chapter 9. A House Divided? The Jesuits and the Other Catholic Clergy and Religious Orders
Conclusion
Bibliography
Index

Book Review: This is a very well-written and well-judged history of the Jesuit mission in England during the reign of Elizabeth I. It relies on both primary and secondary sources and adjudicates well the many issues of the interpretation: were the Jesuits trying to overthrow the English government by coming to England? was the English government persecuting Catholics or prosecuting traitors? did Catholics conform or merely pretend to? Father Scully also probes some specifically Jesuit questions: did they spend too much time with the gentry or did they really have any choice, hunted by pursuivants and needing the shelter of Catholic homes? did they abandon Scotland too soon and fail in Wales or were their decisions in both determined by government persecution?

One slight issue I have with the book is that its thematic format means the narrative repeats: we read about St. Edmund Campion, St. Henry Walpole, St. Robert Southwell, Fathers John Gerard, Henry Garnet, etc, several times--sometimes with a different context, but sometimes with essentially the same informaition. On the other hand, chapter 5 is an excellent overview of the use of the Spiritual Exercises, the Daily Examen, and other devotions throughout the Jesuit Mission in England. Chapter 6 tells the stories of not only the three female martyrs (St. Margaret Clitherow, St. Margaret Ward, and St. Anne Line) but also of the wives and daughters left behind when their husbands and fathers suffered death or exile.

Chapter 7 is a very balanced look at the claims and motives of both sides and the difficult positions Catholics had to try to balance themselves: loyalty to the Queen in matters of state and security and loyalty to the Pope and to the Church in matters of spirituality and religion. Father Scully does not shrink from discussing divisions between the Jesuits and other clergy over the goals and methods of the English mission in Chapter 9 and then unflinchingly measures the success and failure of the mission overall in the Conclusion. The bibliography is excellent; I am so used to endnotes that the footnotes are somewhat distracting to me. Highly recommended as an excellent overview of Catholic life, and especially the Jesuits' contributions to it, during the recusant age of Elizabeth I.
Posted by Stephanie A. Mann at 2:05 AM