Writing with Pen and Paper 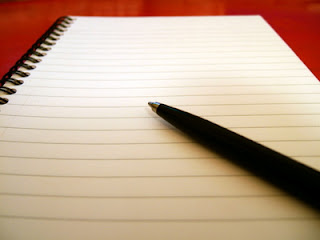 Writing by hand is part of my creative process. The speed at which I write with a pen seems to be the speed at which my imagination finds the best forms of words. A long-ago introduction to the Paris Review Interviews said that authors spoke of pens and rewriting with such passion that it seemed that "writing is one of the plastic arts." I agree with this metaphor of sculpting. I was gratified to read in a Newsweek piece about intelligence last January, that "brain scans show that handwriting engages more sections of the brain than typing" and "it's easier to remember something once you've written it down on paper."

"To think he wrote it all with a feather!" What Sam Goldwyn reportedly said of Shakespeare's works is not as silly as it sounds. Henry James wrote with a quill pen too, until he hurt his arm, and with dictation his style changed. I have seen examples of many writers' handwriting: Thoreau's slanting script (sometimes written with a pencil he had made himself), Naipaul's precision, always in black ink. Henry Miller's handwriting was a model of clarity; so was Anthony Burgess's—and both were also speedy typists.

I write on paper with pen and ink, too. Theroux comments that he uses Lamy pens and a certain paper. I don't require special paper! I write my drafts on paper and then edit while I type. And then I have to print out my work to proofread and edit it again. If I am editing for word count, I will do that with word processing, but otherwise I cannot do edits or proofreading on the computer.

What tools do you use while writing?
Posted by Stephanie A. Mann at 2:25 AM