St. Thomas a Becket and the English Reformation 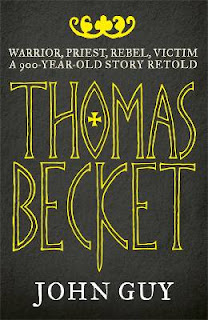 John Guy has written a new biography of St. Thomas a Becket. As a Tudor historian, Guy brings some of the context of that era's struggle between Church and State to this medieval story. According to this review in The Spectator:

Posterity has always embellished Thomas Becket. After his death in Canterbury Cathedral in December 1170 the Church idealised and canonised him; his tomb inspired miracles and became the most famous shrine in Christendom; the local monks grew rich and fat on the tourist trade that would attract Chaucer’s pilgrims. The 18th century invented Henry II’s hint, ‘Who will rid me of this turbulent priest?’ Playwrights spice the dish. Tennyson’s drama about Becket was staged by Irving; everyone remembers Eliot’s chorus, living and partly living; and Anouilh’s play, which turned the Norman immigrant into a Saxon, gave him, in the screened version, a wide and charismatic appeal.

Not that theatricality or charisma was foreign to the real Becket’s complex character. John Guy’s is the first substantial life of the archbishop since the veteran medievalist Frank Barlow’s a quarter of a century ago. On secondment from the Tudor period, Guy carries to the 12th century the scholarly and analytical acumen, and the vivacious prose, he has brought to the 16th.

Popular conceptions of Becket turn on his relations with the king who made and broke him. A blessed friendship turns to tragic enmity. Henry’s worldly chancellor, raised from modest origins to golden heights of power and wealth, suddenly becomes a defiant hair-shirted cleric, driven by either high principle or a taste for martyrdom into a long exile and then, on his provocative return to England, to a death that seizes Henry with remorse.

Guy disposes of much of that picture, and qualifies the rest. He finds no abrupt transition in Becket’s character. Even in his pomp, an inner piety and asceticism nibbled at his worldly contentment. So, as he moved among the ruling barons, did the insecurities of a newcomer who never felt a belonger. Becket, in Guy’s reading, was destroyed not by a personal tragedy but by political inexperience and miscalculation and impulsiveness.

A sense of tragedy is anyway precluded by Guy’s portrait of the king. We meet Henry as the latest in a brutal line of Norman and Angevin rulers obsessed by dynastic ambition and happy to sacrifice the peace and unity of their lands to it. In place of the ‘rose-tinted’ perspective of legal and constitutional historians, who have made Henry the pioneer of an effective and equitable system of justice, Guy gives us a foul-tempered, bullying, venal, perjured tyrant with ‘an innate assumption that his will was law’.

Sound familiar? Henry II=Henry VIII; St. Thomas a Becket=St. Thomas More/St. John Fisher (Thomas More makes the Henry/Thomas parallel so nicely, but Fisher was the Bishop, after all). So Henry II has the Archbishop of Canterbury murdered in his cathedral and the outcry is immediate. The Archbishop is proclaimed a martyr-saint; the king endures penance and a whipping; the pilgrims start coming, and  then:

The Reformation, by nationalising the Church and subjugating it to the state, ended all that. Henceforth Henry II’s interpretation of Becket’s international lobbying as treason, questionable at the time, would seem uncontentious. Henry VIII had Becket’s shrine demolished and despoiled. ‘There appeareth nothing in his life’, the Tudor king proclaimed, ‘whereby he should be called a saint, but rather esteemed to have been a rebel and traitor to his prince.’ Even Charles I, whose readiness to back an archbishop of Canterbury bent on restoring lost powers of the Church would baffle his subjects and help cause the civil war, declared, to the relief of the earl who heard him, that ‘he thought Thomas Becket as arrant a traitor as ever was’. The state had won.

John Guy has a very nice website here. I wonder if the professor who proclaimed St. Thomas a Becket the "Worst Briton of the 12th Century" will read the biography?
Posted by Stephanie A. Mann at 2:12 AM