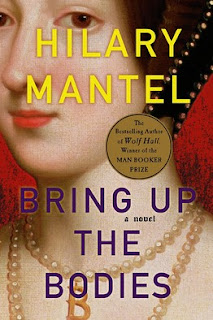 Hilary Mantel appears in the pages of the Wall Street Journal twice this week--news about what is now her three part series on Thomas Cromwell in one story and her own comments about how historical characters should speak.

Her first book about Cromwell was titled Wolf Hall, the second is Bring Up the Bodies and will be published May 8, the third will be The Mirror and the Light:

While "Wolf Hall" introduced fragments of Cromwell's childhood and family life through flashbacks and detailed his rise to political prominence, the condensed action in "Bring Up the Bodies" takes place in a matter of months. It unfolds like a thriller, picking up Cromwell's story in 1535 at the height of a political scandal. King Henry has grown tired of his second wife, Anne Boleyn, who has failed to produce a male heir. Cromwell helps build a case alleging Anne's infidelity.

In the midst of writing "Bring Up the Bodies," Ms. Mantel realized, once again, that the story demanded another volume. She is now launching into "The Mirror and the Light," which will pick up with the execution of Anne Boleyn in 1536 and conclude with Cromwell's beheading in 1540.

In her article on "The Elusive Art of Making the Dead Speak" Mantel discusses some of the traps an author can fall into, assuming that words meant the same thing in the past:

Relax, I think; accept that you will never be authentic. Recently I've been writing about the early Tudor period. We simply don't know how people conversed in that era. Our sources are mostly official: government records, legal documents. The private letters that have been preserved tend to have been kept because they were important: That is, they deal with formal matters. We simply don't know how servants talked between themselves or how the mass of illiterate men and women communicated.

Also, words have changed their meaning since the Tudor era. If I used them now as they were used then, I would confuse and frustrate the reader. The verb "let" for example, now means "permit"; to the Tudors it meant "forbid." What we call a clever man, they called a "witty" man.

But the challenge goes beyond single words. You need to catch the tone of your chosen age. Our ancestors were more formal, more respectful than we are. Nowadays, give or take educational level, language is egalitarian. But in Tudor times, princesses and stable boys did not sound the same. Her vocabulary was more elaborate, derived from Latin, which she spoke and read fluently; his words were simple and robust and had English roots.

A writer must broker a compromise between then and now, and choose a plain style that can be adapted to different characters: not just to their ages and personalities and intelligence level, but to their place in life. I use modern English but shift it sideways a little, so that there are some unusual words, some Tudor rhythms, a suggestion of otherness.

I have not read Wolf Hall; much of the purpose of the first article is to discuss whether one must always read all the books in a series. The title of the second book is most appropriate, as lots of bodies are going to be brought up between 1535 and 1536--the protomartyrs of May 4, 1535 we'll celebrate this Friday, More and Fisher, more Carthusians, not to forget Anne Boleyn and the young men found guilty of adultery with their queen. Lots of bodies.
Posted by Stephanie A. Mann at 2:09 AM