The Tudors and Torture 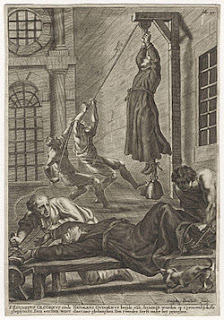 Nancy Bilyeau, author of The Crown, provides some information on torture in Tudor and early Stuart England on the English Historical Fiction Authors blog:

It was in the 16th century that prisoners were unquestionably tortured in the Tower of London. The royal family rarely used the fortress on the Thames as a residence; more and more, its stone buildings contained prisoners. And while the Tudor monarchs seem glittering successes to us now, in their own time they were beset by insecurities: rebellions, conspiracies and other threats both domestic and foreign. There was a willingness at the top of the government to override the law to obtain certain ends. This created a perfect storm for torture.

"It was during the time of the Tudors that the use of torture reached its height," wrote historian L.A. Parry in his 1933 book The History of Torture in England. "Under Henry VIII it was frequently employed; it was only used in a small number of cases in the reigns of Edward VI and of Mary. It was whilst Elizabeth sat on the throne that it was made use of more than in any other period of history."

Bilyeau mentions the Little Ease, a cell in which the occupant, if normal size, could not either stand upright or lay down completely, and some other forms of torture:

Besides Little Ease, the most-used torture devices were the rack, manacles, and a horrific creation called the Scavenger’s Daughter. For many prisoners, solitary confinement, repeated interrogation, and the threat of physical pain were enough to make them tell their tormentors anything they wanted to know.

The Scavenger's Daughter was the opposite of the Duke of Exeter's Daughter, aka the rack--instead of stretching the victim, it compressed the body. Blessed Thomas Cottam, executed on May 30, 1582, endured both the Duke's and the Scavenger's Daughters while in the Tower. Prisoners were also laden with chains and heavy fetters; starved and refused water; left to endure exposure, and had pins stuck up under their fingernails.

I fell on my knees for a moment's prayer. Then they took me to a big upright pillar, one of the wooden posts which held the roof of this huge underground chamber. Driven into the top of it were iron staples for supporting heavy weights. Then they put my wrists into iron gauntlets and ordered me to climb two or three wicker steps.

My arms were then lifted up and an iron bar was passed through the rings of one gauntlet, then through the staple and rings to the second gauntlet. This done, they fastened the bar with a pin to prevent it from slipping, and then, removing the wicker steps one by one from under my feet, they left me hanging by my hands and arms fastened above my head. The tips of my toes, however, still touched the ground, and they had to dig the earth away from under them. They had hung me up from the highest staple in the pillar and could not raise me any higher, without driving in another staple.

Hanging like this I began to pray. The gentlemen standing around me asked me whether I was willing to confess now.


But I could hardly utter the words, such a gripping pain came over me. It was worst in my chest and belly, my hands and arms. All the blood in my body seemed to rush up into my arms and hands and I thought that blood was oozing from the ends of my fingers and the pores of my skin. But it was only a sensation caused by my flesh swelling above the irons holding them.


The pain was so intense that I thought I could not possibly endure it, and added to it, I had an interior temptation. Yet I did not feel any inclination or wish to give them the information they wanted. The Lord saw my weakness with the eyes of His mercy, and did not permit me to be tempted beyond my strength. With the temptation He sent me relief. Seeing my agony and the struggle going on in my mind, He gave me this most merciful thought: the utmost and worst they can do is to kill you, and you have often wanted to give your life for your Lord God. The Lord God sees all you are enduring - He can do all things. You are in God's keeping.


With these thoughts, God in His infinite goodness and mercy gave me the grace of resignation, and with a desire to die and a hope (I admit) that I would, I offered Him myself to do with me as He wished. From that moment the conflict in my soul ceased, and even the physical pain seemed much more bearable than before, though it must, in fact, I am sure, have been greater with the growing strain and weariness of my body...

At the end of her post, Bilyeau states that these forms of torture ended during the reign of Charles I--and that is true. But during his son's reign, the Popish Plot hysteria revived some of these terrors, especially the use of chains and fetters.
Posted by Stephanie A. Mann at 2:15 AM