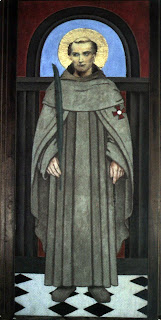 I've blogged about St. John Houghton and the Carthusians of the Charterhouse of London before, but have not yet focused on St. Richard Reynolds of the Bridgettine House of Syon. St. Richard was also executed on May 4, 1535. This website offers some information (with a few errors--St. John Fisher was not executed before the Carthusians and St. Richard, as the article states!):

Further turning the King against the frightened Brigittines (sic) was Richard Reynolds, a priest-confessor. Not only was he exceptionally loyal to the Holy Father but he refused to accept that Henry could divorce his wife, Katherine, and that his monarch could be head of the Church of England.

. . .This infuriated Henry because Father Richard was something of a folk hero. He could not be killed summarily, largely because of the widespread unrest among the laity. So he was brought to trial and interrogated by Chancellor Audley, a successor to St. Thomas More, who also was martyred for maintaining papal authority.

Tragically, Richard got little support from the bishops and senior clergy. They had recently seen the Cardinal Bishop of Rochester, John Fisher, go to the block (sic), and now was not the time for heroics.

In fact, Cardinal Reginald Pole, later the Papal Legate under Queen Mary, lamented that Richard was let down by the bishops. All 19, except St. John Fisher, had agreed to severing ties with Rome, and this acquiescence was used as a cudgel against him. Thus, he was characterized as a rebellious priest who was disloyal to England's hierarchy.

Richard did not yield. According to Cardinal Pole, he kept a level head and reminded Audley that, more importantly, on his side were "all Church general councils, all the historians, the holy doctors of the Church for the past 1,500 years, especially St. Ambrose, St. Jerome, St. Augustine and St. Gregory."

St. Richard Reynolds attended Christ’s College and Corpus Christi College, University of Cambridge and became a Fellow of Corpus Christi in 1510. He then entered the Bridgettine Order in 1513 at Syon Abbey, Ilseworth near London. Noted for his scholarship and personal holiness, he was arrested on April 28, 1535 because he would not acknowledge Henry VIII as the Supreme Head and Governor of the Church in England. This site provides information about Bridgettine life at Syon today (and the portrait of St. Richard above.) It is now located in Devon. The original Syon Abbey is now the home of the Duke of Northumberland. The website includes this note about the history of Syon Abbey, St. Richard Reynolds and Henry VIII:

Originally the site of a medieval abbey, Syon was named after Mount Zion in the Holy Land. The abbey was dedicated to the Bridgettine Order, established in the 14th century by the great Swedish mystic St Bridget. One of the last great abbeys to be built (founded by King Henry V in 1415), Syon was dissolved by King Henry VIII in 1539.

Syon Abbey had become renowned for its spiritual learning, public preaching and library. It was favoured and visited by King Henry VIII’s first wife, Catherine of Aragon but it got embroiled in the religious turmoil of the King’s divorce and his subsequent action of making himself Supreme Head of the Church in England. The Father Confessor, of the nuns, Richard Reynolds, could not accept the King’s supremacy and was brutally executed in 1535, his body placed on the abbey gateway. He was later canonised as a martyr.

In 1547, King Henry VIII's coffin was brought to Syon on its way to Windsor for burial. It burst open during the night and in the morning dogs were found licking up the remains! This was regarded as a divine judgement for the King's desecration of Syon Abbey.
I could not have said it better myself.
Posted by Stephanie A. Mann at 2:03 AM