May 4th, Feast of the English Catholic Martyrs 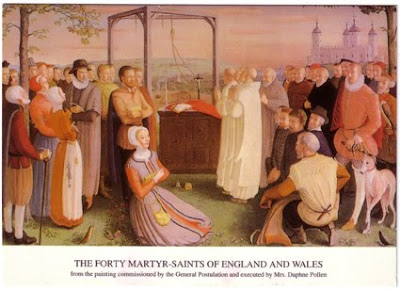 Six years ago on this feast day of the Catholic Martyrs of the English Reformation, Anglican Bishop Richard Chartres of London and Catholic Auxiliary Bishop George Stack of Westminster held an ecumenical service in honor of the first Catholic martyrs under Henry VIII. Catholic News Service carried the story the next day:

"We who today give thanks to the witness of these Carthusian martyrs and the martyrs of every age may not be called upon to die for the faith that we profess, but there is no doubt that, whatever our Christian tradition, each of us who believe are challenged to live for that faith by Jesus Christ, the king of martyrs who gave his life as a ransom for all of us," he said.

Red roses, each representing a martyr, were then placed into a model of the "Tyburn Tree," the triangular London gallows where 105 Catholics were executed during the Reformation.

St. John was the first of four priests hanged May 4, 1535, after they were convicted of treason for refusing to take the oath of the Act of Supremacy, the law that made the king the supreme leader of the Church of England.

St. Thomas More, watching their departure from the window of his cell in the Tower of London, remarked to his daughter, Margaret, how the men went "to their deaths as cheerfully as bridegrooms to their marriage."

St. John was said to have remained conscious throughout an ordeal that involved partial hanging and disembowelment.

[N.B.: The execution of the Carthusians was made more torturous by the fact that they wore their habits and St. John also wore a hair shirt.]

Two other Carthusian abbots, St. Robert Lawrence and St. Augustine Webster, and a Brigittine monk, St. Richard Reynolds, were executed in the hours that followed.Afterward, King Henry ordered one of St John's arms to be nailed over the main entrance of the Charterhouse as a warning to others.

According to the Archbishop of Canterbury's website, the death of the Carthusians and St. Richard Reynolds has been remembered with such as service since 2004:

Since 2004 there has been a Commemoration of the Carthusian Martyrs at Sutton's Hospital each year.

In 2005 the Bishop of London attended with Bishop George Stack representing the Cardinal.

In 2006 the Commemoration was combined with a Requiem for Fr Geoffrey Curtis CR who caused the Carthusian Martyrs' Memorial to be erected at Sutton's Hospital on the site of the ancient Priory Church.

In 2008 the preacher was Bishop John Flack who had been the Director of
the Anglican Centre in Rome.

In 2009 the homily was by Cardinal Cormac Murphy O'Connor but sadly he was unable to deliver it in person – Bishop George Stack did so. The Apostolic Nuncio was in attendance and read the Second Lesson.

And in 2010 Rowan Williams delivered the sermon I commented on last year--reflecting on Henry VIII, Hell, Robert Aske in H.F.M. Prescott's novel, and St. John Houghton.

Before he died, St. John prayed the first six verses of Psalm 31 and his last words are reported as "Jesus, Jesus, what will you do with my heart?":

Since the Vatican approved the revised liturgical calendar for England and Wales, this May 4th Feast there has honored both the 40 martyrs Pope Paul VI canonized in 1970 and the 85 martyrs Blessed John Paul II beatified in 1987.