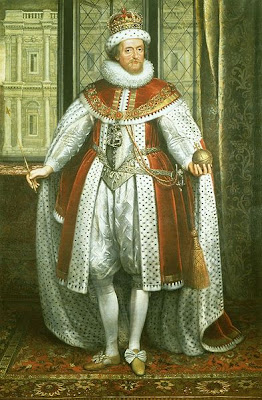 Two martyrs and some notes on Catholic martyrdom during the reign of James I:

St. John Roberts, OSB and Blessed Thomas Somers were executed as traitors/priests at Tyburn Tree during the reign of King James I .

According to this site, St. John Roberts was the

Son of John and Anna Roberts; his ancestors were princes in Wales. Raised Protestant, John always felt an affinity for Catholicism. He studied at Saint John’s College, Oxford from 1595 to 1597, but left without a degree. He then studied law at the Inns of Court at age 21. In 1598, while travelling in France, he joined the Church of Rome at Notre Dame in Paris.

While in exile he founded a house in Douai for exiled English Benedictines; this house became the monastery of Saint Gregory. Responsible for the conversion of Blessed Maurus Scott. Returned to England in October 1607, was arrested in December, and sent to Gatehouse prison. He escaped, and spent a year working in London, but was again arrested. His execution was scheduled for May 1609, but the intercession of the French ambassador led to a reduction in sentence; he was exiled yet again.

Returned to England a few months later, he was arrested while celebrating Mass on 2 December 1610. Convicted on 5 December 1610 of the crime of priesthood. Martyred with Blessed Thomas Somers.

He was canonized by Pope Paul VI as one of the 40 Martyrs of England and Wales in 1970.

Blessed Thomas Somers was a Schoolmaster who left England to become a seminarian in Douai, France. He was ordained there and then returned to England to minister to covert Catholics in London, sometimes using the alias Thomas Wilson. Arrested and condemned to death for the crime of being a priest. He was beatified in 1929 by Pope Pius XI.

James VI of Scotland and I of England and Ireland executed fewer priests and laity under his predecessor's treason and felony laws. Although terrified after the near miss, James was really rather restrained in his reaction to the Gunpowder Plot of 1605. At least, he was restrained if you compare the numbers of Catholics executed for their faith in the years after the November 5, 1605 discovery of the plot to the brutal reaction of Elizabeth I's government after the failed Spanish Armada in 1588. In 1606, there were three martyrs (including Nicholas Owen by torture); one in 1607; three in 1608 (including Thomas Garnet, SJ); none in 1609. Compare that to the executions of 1588 alone: eight on August 28; six on August 30; seven more on October 1 and three on October 5--and the martyrdoms continued through the end of Elizabeth I's reign.

In 1610, however, in reaction to the assassination of King Henry IV of France by Francois Ravillac in May, James' fears were revived. The Oath of Allegiance, which he thought perfectly reasonable and limited to temporal loyalties, had not been accepted by Catholics as well as he hoped, and thus there was a slight uptick in executions--still only four (the others were Roger Cadwallador and George Napper, the latter in Oxford).

Then things settled down again until the reign of Charles I.

So why this pattern? For one thing, James I believed that persecution was the sign of a false church (which also shows he knew this persecution to be on religious grounds, not merely for state security). Also, the diplomatic positions that James took emphasized peace and conciliation with Catholic Spain or even France, so persecution would be suspended during when it was the diplomatic thing to do--when he was negotiating for the Spanish or French matches, for example. The ambassadors of Spain actively campaigned for priests to be freed and exiled. On the side of enforcing the Elizabethan statutes against Catholic priests were his Archbishop of Canterbury and Parliament, so a few sacrificial lambs would be offered up from time to time.
Posted by Stephanie A. Mann at 2:19 AM