"Give my figgy pudding!": The Puritans Against Christmas 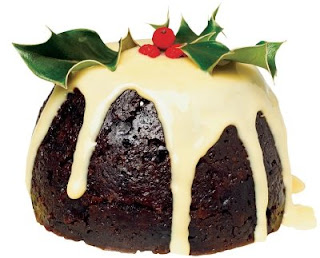 Courtesy of Tea at Trianon: The Puritans ban Christmas during the Interregnum (the period between the fall and execution of Charles I until the restoration of Charles II)--and don't understand why people keep breaking the rules, steaming their puddings and roasting their geese!

This is surely one instance that supports H.L. Mencken's definition: Puritanism: The haunting fear that someone, somewhere, may be happy.

Conflict over Christmas marked the relations between Parliament and the Court of Charles I before the English Civil War and the capture and execution of Charles I. The Puritans knew what the word ChristMAS means--and that the celebration of the Catholic Mass was at the center of the celebration of the birth of Jesus Christ. They also thought all the other festivities and feasting centered around Christmas were "Popish" and "Papastical," very bad things to be! Once they had the power, if Parliament proclaimed the fourth Saturday of December was to be a day of fasting and the fourth Saturday of December happened to be December 25, Christmas Day, the day of fasting trumped the day of feasting and celebration. Even if Christmas Day fell on a Sunday, there was to be no special commemoration. The Book of Common Prayer was banned and the Church of England, like the Catholic Church, gone underground. Celebrating Christmas was an act of rebellion against the rebels who had become the rulers of England!

As both Diane Purkiss and Alister McGrath have commented, Puritanical control of England during the Interregnum period doomed the future of radical Protestantism in England, while the Restoration of Charles II and the Stuart Monarchy restored the celebration of Christmas in England. The Restoration Parliament made sure that Puritan influence was stifled. And that's too bad in some ways, for certainly Charles II's Court needed some discipline and moral direction; but after the experiments of the Commonwealth and the Protectorate, any such protests against misbehavior at Court was just a reminder of mean people who took away one's figgy pudding and roast goose! As Alister McGrath wrote in his history of Protestantism, the Puritans failed in England because they "lost any popular sympathy through their religious rigidity".

Brian Patrick and I will discuss this theme on the Son Rise Morning Show sometime this week--I'll update and let you know ASAP! 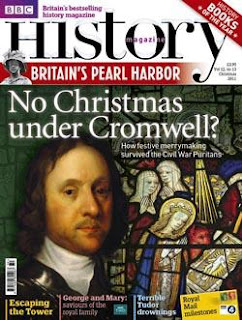 UPDATE: please note that the BBC's History Magazine features a cover story on "popular resistance to the Puritan assault on Christmas during the 1640s and 1650s" by Mark Stoyle, Professor at the University of Southampton! A facebook friend let me know.

UPDATE: I'll be on the Son Rise Morning Show this morning--December 21--Listen Live Here!
Posted by Stephanie A. Mann at 2:07 AM