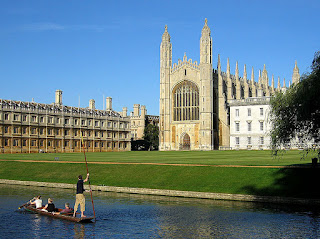 The choirs at King's College Chapel are preparing for the Festival of Nine Lessons and Carols this Saturday, Christmas Eve:

A Festival of Nine Lessons and Carols is the Christmas Eve service held in King's College Chapel. The Festival was introduced in 1918 to bring a more imaginative approach to worship. It was first broadcast in 1928 and is now broadcast to millions of people around the world.

The service includes carols and readings from the Bible. The opening carol is always 'Once in Royal David's City', and there is always a new, specially commissioned carol.

This year's commissioned carol is a setting of Christina Rossetti's 'Christmas Eve' by Tansy Davies - see the news story about it.

King's College and the Chapel were founded by King Henry VI. Work on the chapel continued during the Yorkist reigns of Edward IV and Richard III, but much of the work, especially the stained glass, was completed by Henry VIII.

Here is the text of the Rossetti Poem:

Earth, strike up your music,
Birds that sing and bells that ring;
Heaven hath answering music
For all Angels soon to sing:
Earth, put on your whitest
Bridal robe of spotless snow:
For Christmas bringeth Jesus,
Brought for us so low.

Remember that the BBC broadcasts the Festival.
Posted by Stephanie A. Mann at 2:17 AM