The birth of Katherine of Aragon 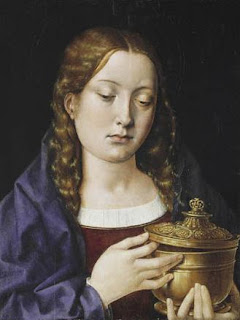 Henry VIII's first wife, Princess of Wales, Spanish Ambassador for her father, Queen Regent, and mother of six of his children, Katherine of Aragon was born December 16, 1485, the youngest daughter of Queen Isabella of Castile and King Ferdinand of Aragon. As I've commented before, she resembled her mother, fair and light-haired--not dark as so often depicted on screen in movies about Henry VIII and his wives.

Many aspects of her life's story revolve around her second husband's efforts to have their marriage annulled, but I would like to highlight her interest in her surviving daughter Mary's education. Katherine herself had received a fine humanist education, learning Latin and Greek, Spanish and French, studying the classics, history and canon and civil law. Erasmus himself commended her learning and appreciation for literature. She had been prepared to rule and she wanted her daughter to be prepared also.

Juan Luis Vives of Spain became Mary's tutor and wrote a handbook on the education of Christian females which he dedicated to Katherine of Aragon: De Institutione Feminae Christianae. He detailed the course of Mary's study in De ratione studii puerilis. While he is not a feminist nor overemphasizes female virtue, he is certainly not a misogynist although he is opposed to fancy clothing and makeup. Vives resided at Corpus Christi College in Oxford where he lectured on philosophy as a Doctor of Law. Henry and Katherine attended some his lectures. Because he supported Katherine against Henry in the King's Great Matter, he fled to the Continent, residing in Bruges.

The care Katherine took in the education of her daughter demonstrates another great quality of this excellent queen. She did not just leave Mary in the hands of her tutor but continued to take an active interest in her progress. Separation from her daughter, as well as from the man she always regarded as her lawful and true husband were the great sorrows at the end of her life. That Henry forbade contact between mother and daughter, especially when Katherine became very ill is another demonstration of his monstrous desire to punish those who opposed his will in his Great Matter.

I reviewed Giles Tremlett's Catherine of Aragon: The Spanish Queen of Henry VIII in January this year. According to Amazon, there are two new biographies coming, one by Patrick Williams and other by Julia Fox, a dual biography of Catherine and her sister Juana. Both Williams and Fox use the word "tragic" in their subtitles.

(The painting above depicts Katherine at age 14 as St. Mary Magdalen, painted while she was still in Spain.)
Posted by Stephanie A. Mann at 2:07 AM