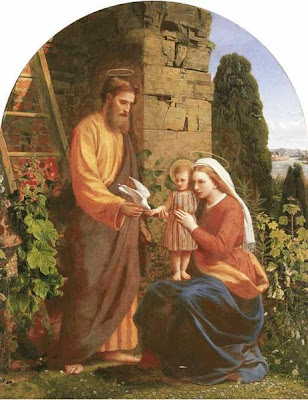 "Christ, Hidden from the World":

His condescension in coming down from heaven, in leaving His Father's glory and taking flesh, is so far beyond power of words or thought, that one might consider at first sight that it mattered little whether He came as a prince or a beggar. And yet after all, it is much more wonderful that He came in low estate, for this reason; because it might have been thought beforehand, that, though He condescended to come on earth, yet He would not submit to be overlooked and despised: now the rich are not despised by the world, and the poor are. If He had come as a great prince or noble, the world without knowing a whit more that He was God, yet would at least have looked up to Him and honoured Him, as being a prince; but when He came in a low estate, He took upon him one additional humiliation, contempt,—being contemned, scorned, rudely passed by, roughly profaned by His creatures.

What were the actual circumstances of His coming? His Mother is a poor woman; she comes to Bethlehem to be taxed, travelling, when her choice would have been to remain at home. She finds there is no room in the inn; she is obliged to betake herself to a stable; she brings forth her firstborn Son, and lays Him in a manger. {241} That little babe, so born, so placed, is none other than the Creator of heaven and earth, the Eternal Son of God.

Well; He was born of a poor woman, laid in a manger, brought up to a lowly trade, that of a carpenter; and when He began to preach the Gospel He had not a place to lay His head: lastly, He was put to death, to an infamous and odious death, the death which criminals then suffered.

For the three last years of His life, He preached the Gospel, I say, as we read in Scripture; but He did not begin to do so till He was thirty years old. For the first thirty years of His life, He seems to have lived, just as a poor man would live now. Day after day, season after season, winter and summer, one year and then another, passed on, as might happen to any of us. He passed from being a babe in arms to being a child, and then He became a boy, and so He grew up "like a tender plant," increasing in wisdom and stature; and then He seems to have followed the trade of Joseph, His reputed father; going on in an ordinary way without any great occurrence, till He was thirty years old. How very wonderful is all this! that He should live here, doing nothing great, so long; living here, as if for the sake of living; not preaching, or collecting disciples, or apparently in any way furthering the cause which brought Him down from heaven. Doubtless there were deep and wise reasons in God's counsels for His going on so long in obscurity; I only mean, that we do not know them. . . .

We are very apt to wish we had been born in the days of Christ, and in this way we excuse our misconduct, when conscience reproaches {246} us. We say, that had we had the advantage of being with Christ, we should have had stronger motives, stronger restraints against sin. I answer, that so far from our sinful habits being reformed by the presence of Christ, the chance is, that those same habits would have hindered us from recognizing Him. We should not have known He was present; and if He had even told us who He was, we should not have believed Him. Nay, had we seen His miracles (incredible as it may seem), even they would not have made any lasting impression on us. Without going into this subject, consider only the possibility of Christ being close to us, even though He did no miracle, and our not knowing it; yet I believe this literally would have been the case with most men. . . .

Let us then pray Him ever to enlighten the eyes of our understanding, that we may belong to the Heavenly Host, not to this world. As the carnal-minded would not perceive Him even in Heaven, so the spiritual heart may approach Him, possess Him, see Him, even upon earth.
Posted by Stephanie A. Mann at 2:19 AM