The Last Abbot of Colchester 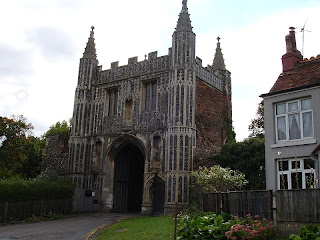 John Beche (alias Thomas Marshall) was executed for treason on December 1, 1539--the last abbot of Colchester's Benedictine abbey. He had previously been the abbot at St. Werburgh's abbey in Chester. In 1534, he took Henry VIII's Oath of Supremacy, but after the executions of the Carthusians, Thomas More, and John Fisher in 1535, he began to speak of them as martyrs of the Faith. His comments were reported to Henry VIII and when he refused to surrender the Abbey of St. John in Colchester, he was arrested and held in the Tower of London. John Beche was returned to Colchester to face charges of treason against Henry VIII's role as Supreme Head and Governour of the Church in England and found guilty. He was hung, drawn, and quartered in Colchester on December 1, 1539.

The priest at the Church of St. James the Less and St. Helen in Colchester announces a special Mass in memory of Blessed John Beche:

BLESSED JOHN BECHE
The last Abbot of St. John's Abbey, Colchester, was martyred in Colchester on the 1st December 1539. His feast occurs this Thursday and, as an act of Parish devotion, we have been given permission by the Museum Authorities to celebrated Masses in the room within the Gatehouse. The Masses will be on Thursday, The Masses will be on Thursday, 1st December, at 12pm and 2pm; and at 12 noon on Friday, 2nd, and Saturday, 3rd December. For reasons of Health & Safety the room can only accommodate 20 people and you will need to sign the lists at the back of the Church or notify Jennie on 01206 768487 if you wish to attend. Please note there are no chairs in the room; access is via a spiral staircase of 29 steps; there is no heating and no parking, so this is not for the faint-hearted! [Mass will be said at the usual times in the Church on these dates].

The picture above, sourced from wikipedia, is of the Gatehouse where those Masses will take place. More about the abbey and its last abbot here.
Posted by Stephanie A. Mann at 2:05 AM