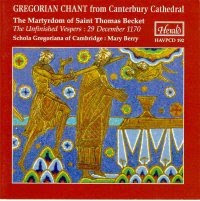 This recording by the Schola Gregoriana of Cambridge, founded by the late Mary Berry tells the story of the martyrdom of St. Thomas a Becket by recreating the vespers interrupted that night by Henry II's knights:

The story of the Martyrdom of Saint Thomas Becket has been told many times. There are contemporary eye-witness accounts of how the four knights rushed in and slew the Archbishop in his own cathedral of Canterbury; there are scholarly modern historical studies; the story is told in the stained-glass windows of the cathedral itself; and of course there are Chaucer’s entertaining Canterbury Tales… This recording approaches the story from another angle: it is an attempt to capture through music each major act of the grim drama as it unfolds. . . . It is rare to find intact the office music for the feast of St Thomas. In nearly all the sources the relevant pages have been torn out or defaced in the 16th century by order of Henry VIII. However, in an early 13th-century noted breviary from Lewes Priory it appears in pristine condition and it is from this source that the music for the recording has been transcribed.

Mary Berry was an Augustinian Canoness Congregation of Notre-Dame de Jupille in Belgium and a great champion of Gregorian Chant who died on May 1, 2008. Her Times obituary is here:

Devout and erudite, Berry radiated a joyful and sunny blessing, occasionally interspersed with crisp commands if singers flat-footed a wrong note. There were no concessions to ignorance — either of the chant or the liturgy — but her bubbling humour leavened long hours of choir practice. With a fund of interesting and mildly scurrilous anecdotes delivered with a twinkle in her eye, she was fortunate to attract many fine cantors to sing at festivals and record CDs on the Herald label.

The cantors of the Schola, a professional group of singers interested in Gregorian chant and early music, specialise in the reconstruction and performance of liturgy from the 10th century to modern times. Led by Berry, they were the first in the field to record a reconstruction of a complete festal service based on the tropes and organa of the Winchester Troper, and this won the Michael Beazley Medieval Recording of the Year in 1991. Their work was, and continues to be, very significant in bringing early music to a wider audience.

In 2000 she was awarded the Papal Cross Pro Ecclesia et Pontifice for her work with Gregorian chant, and in 2002 she was appointed CBE for her services to plainsong and Gregorian chant.

I ordered this CD last December and did not receive it until February! Customs between the U.K. and the U.S. held it up considerably. I will listen to it again today.

St. Thomas a Becket, pray for us.

It is rather interesting to note that the breviary that provided the office music for the Feast of St. Thomas a Becket survived the suppression of Lewes Priory, the great Cluniac house.
Posted by Stephanie A. Mann at 2:04 AM