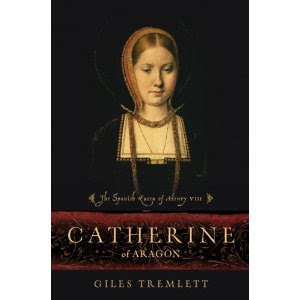 Catherine of Aragon: The Spanish Queen of Henry VIII is the first full-length biography of the subject since Garrett Mattingly's 1942 study. Henry VIII was married to her longer than all of his other wives combined; she was his only consort with truly consequential international connections and Henry had known her since he was ten years old when she came to England to marry his older brother Arthur.

Tremlett tells the story of her childhood in Spain and her adolescence in England after Arthur died very effectively, identifying her background and resilence in the face of uncertainty while living as the widowed Princess of Wales until Henry VII dies and his heir Henry VIII decides to act upon the dispensation obtained and marry her, quietly, and crown her, magnificently. He mentions an adolescent eating disorder and some resulting feminine problems that might have contributed to her later troubled pregnancies. Tremlett also introduces the theme of the young King and Queen's difficulty in knowing exactly when she pregnant and when she would deliver a baby, based often on the rudimentary medical knowledge of the time. They rejoiced when two baby boys were born and mourned when they died as infants. When Mary was born in 1516, Henry was still hopeful that they would have a son.

As he notes, they were a well-matched pair, especially in the early days of their reign; he enjoyed having fun and she was often at the center of it; he was young and athletic and she was beautiful and talented. He recognized her abilities as queen and her qualities as a wife; she accepted his infidelities and supported most of his diplomatic projects, although she favored Spanish alliances. Catherine was able to serve as regent in Henry's absence and take leadership at Court, serving him domestically (making his shirts) and socially (hosting royal events and preparing for the great Field of the Cloth of Gold).

When Henry decided to have their marriage annulled, however, he demonstrated that he really did not know her that well: somehow he did not know how strong and defiant Catherine could and would be; how well she could use her connections in Europe and indeed how popular she was in England. Catherine really won the battle against Henry in his attempts to get the Papacy to set aside their marriage, but of course she lost the war once he began to use brute force, terror, and absolute power. Tremlett provides exquisite detail about how Henry's nobles regretted his use of them to harass and threaten her. They hoped they could have terrible accidents or die on the way to her homes in exile, leaving Court to return to their estates so they could avoid another mission to make her move again, take away her jewels, dismiss trusted servants, or inform her again that she was not the Queen of England. Otherwise, they had to face her strength and vulnerability, her willingness to suffer the humiliation Henry dealt out (often at the urging of Anne Boleyn), even to die, and yet remain obdurate. And then they had to go back to Henry and tell him how it all went!

One thing Tremlett brings up several times is Catherine's ability to dissemble, first in connection with all the confusion surrounding her first pregnancy (she wrote to her father long after the pregnancy terminated to let him know about the miscarriage) and perhaps in connection with her claim that her first marriage to Arthur was never consummated. But as Tremlett admits, Catherine had placed the matter of whether or not she was a virgin when she and Henry married firmly up to Henry. She challenged him at the great trial at Blackfriars and he never replied--his tender conscience evidently would not allow him to deny her claim. He, Wolsey and Cromwell were willing to lie about her otherwise (claiming at one point that she had some horrible disease that prevented him from sleeping with her), but Henry would not swear an oath denying that she was a virgin when they married. I really doubt that she lied about it.

At the end, Tremlett dwells on Catherine's feelings of guilt that her intransigence was leading Henry to destroy the Church, kill good men, and endanger his own soul. He doesn't absolve her (I might) but does commend her for avoiding the path that could have led to military invasion and civil war in England.

After finishing this book I am on to Anna Whitelock's Mary Tudor: Princess, Bastard, Queen, which begins with the admonition that one has to know about the mother (Katherine of Aragon; Anna uses the K spelling) to understand the daughter. Let's see how well prepared I am and how much Anna and Giles agree.
Posted by Stephanie A. Mann at 2:00 AM