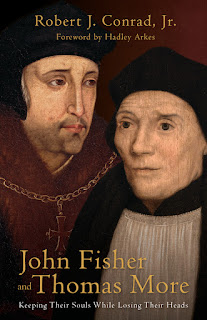 I ended the year 2021 and have begun the year 2022 with a head cold, but also with the publication of my review of a new book about Saints John Fisher and Thomas More in the National Catholic Register:
St. Thomas More shares a feast with St. John Fisher on the date of the cardinal-bishop’s death on June 22 (in 1535). Yet, probably because, as author Robert Conrad Jr. says, Fisher’s virtues aren’t celebrated in an award-winning movie like A Man for All Seasons, he has been somewhat eclipsed by More. In John Fisher and Thomas More: Keeping Their Souls While Losing Their Heads, Conrad attempts to redress this injustice in a very personal way, exploring both Fisher’s and More’s responses to Henry VIII’s usurpation of ecclesial authority in England. Throughout the book, Gardner holds both men up as models for us to follow in courage, fidelity, integrity, piety, Christian joy, perseverance and other virtues. Instead of offering a chronological dual biography, he presents a series of 12 vignettes in both men’s lives to demonstrate their practice of these virtues, culminating in their martyrdoms.

In keeping with his effort to highlight St. John Fisher as well St. Thomas More, Conrad begins his series of anecdotes in Chapter 1 on “Conscience” with Bishop John Fisher’s forthright refusal to be coerced into agreeing with the rest of the English bishops in support of Henry VIII’s actions. Conrad highlights the courage of Fisher, not taking the easy way out when the archbishop of Canterbury, William Warham, declared the unanimous agreement of the bishops with Henry VIII at the Legatine Court in 1529: Bishop Fisher denies he signed the document, he denies his signature on the document is authentic, and he denies that he agrees with the document. Neither Warham’s embarrassment nor Henry VIII’s impatience dissuade him. As Conrad concludes, Fisher “spoke with strength to power nonetheless” (p. 16). . . .
Please read the rest there.
Judge Conrad's book demonstrates once again the impact of these saints' lives upon us today. The example of their lives, not just their deaths, inspire us every day.
Pause to consider that on this day, January 1, 1535 (although they weren't really celebrating the New Year as we are today), 487 years ago, they were imprisoned in the Tower of London, with cold stone walls about them, and yet we know that their thoughts were still about Jesus and the salvation He won for us! Their faith, though tested, was true and they were strong in hope and love. 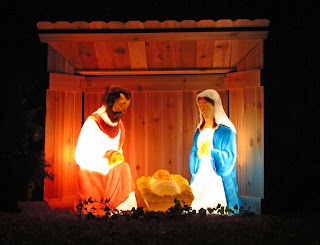