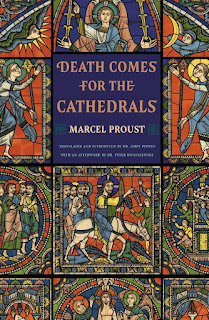 "Suppose for a moment that Catholicism had been dead for centuries, that the traditions of its worship had been lost. Only the unspeaking and forlorn cathedrals remain; they have become unintelligible yet remain admirable."

So begins Marcel Proust's Death Comes for the Cathedrals (La mort des cathédrales), originally published in Le Figaro (1904). Proust addresses the political and religious debate concerning the "the Briand bill," a parliamentary proposal which imperiled the fate of French Cathedrals-"the first and most perfect masterpieces" of Gothic architecture. The great author of In Search of Lost Time gives prophetic voice to his own fear that "France would be transformed into a shore where giant chiseled conches seemed to have run aground, emptied of the life that inhabited them and no longer bringing an attentive ear to the distant murmur of the past, simply museum objects, themselves frozen." As Proust makes plain, though the cathedrals of France and the traditional liturgy of the Roman rite are the spiritual inheritance of the Church, they are part of the patrimony of all humanity and, pending preservation, their loss would leave all the world impoverished.

This Wiseblood Books edition of Death Comes for the Cathedrals includes an introduction by its translator, Dr. John Pepino, and an afterword by Dr. Peter Kwasniewski, who wonders whether life may yet return to the cathedrals. Throughout, beautiful color images of Chartres and its architectural features grace the pages.

With impeccable--or providential--timing, Wiseblood Books released this translation of Marcel Proust's pamphlet urging the Third French Republic not to close the great Gothic Cathedrals of France and turn them into museums or other cultural sites as news came of the proposed, controversial changes to the interior of Notre Dame de Paris, which have been approved to some extent by the French National Heritage and Architecture Commission.
The one comment I'd make about these changes at Notre Dame de Paris is that they seem to be aimed more at the tourist, who knows she simply has to visit the Cathedral as the guidebook tells her, and less at the worshipper, who comes to pray, to go to Confession, and to attend Mass. Note these lines from the Smithsonian Magazine story linked above:

Advocates argue that the approved plan will make Notre-Dame “even more beautiful and welcoming” for the millions of people who visit the site each year, according to a diocese press release. Critics, however, say that the renovations will reduce the standing of the historical building into a theme park. . . .

Visitors will now be able to enter the cathedral through its grand central doors rather than the side entrance as previously directed. The diocese also plans to rearrange altars and other items to free up space for people to move around, per the Times. . . .

The commission rejected some details of the diocese’s plan, including a proposal to remove statues from some chapels, per the Times. Experts have also asked to review a prototype of newly proposed benches, which would replace the traditional straw chairs. In theory, the benches might be designed to descend into the floor when not in use—freeing up more space for tourists, reports the AFP. . . .

What about the people of Paris who attend Mass, Evening Prayer, the devotions to the Crown of Thorns, or other services? Or Catholics from around the world visiting Paris and attending Sunday Mass? How are they served by these renovations?
Back to the book: 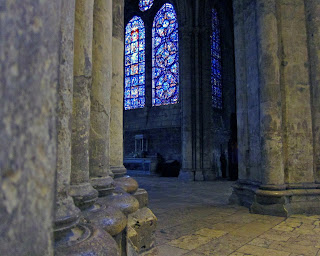 Proust's argument is that these Gothic cathedrals, great monuments of French art, were built for the  celebration of the great and Holy Sacrifice of the Catholic Mass. They were built to facilitate the celebration of what we now call the Traditional Latin Mass, the Mass of the Ages. Their art and architecture, their acoustics were meant to resound with Gregorian and Polyphonic prayers, antiphons, and sequences. He does not want them destroyed by taking away their reason for being built, maintained, and used through the centuries, in spite of war, revolution, desecration, and other fashionable changes (clear glass replacing stained glass in Notre Dame de Paris during the reign of Louis XIV, for example).
Mark and I visited the Sainte Chapelle a couple of times during our 10 visits to Paris, which is a beautiful example of Gothic Art, but it is a hollow shell, exactly what Proust envisioned could happen to Chartres or other Gothic Cathedrals (Amiens, Reims, Paris, etc, etc.) There aren't any Altars in Saint Louis' reliquary for the Crown of Thorns, no Tabernacles, no Real Presence--the lower level sanctuary contained the tourist shop when we visited and of course, one must pay to enter this tourist attraction.
Proust is an unlikely source one might think for such a defense of the practice of the Catholic Faith in Notre Dame de Chartres and other great cathedrals, but he recognized the truths of French history, of her culture and the legacy of the high Middle Ages. As an artist he recognizes the integrity and continuity of that past and warned the people and the government of its loss. He also advised the Church in France to find in artists like him allies for defending that legacy. Proust knew that a nation, a people, the Church, an individual cannot be cut off from the past without great loss of identity and meaning. Fortunately for us--although some churches throughout France like Sainte Chapelle have been repurposed and lost--he persuaded the government and the public against what Aristide Briand had proposed. Proust, like Renan, and Flaubert, both of whom he quotes, may not have been a believing, practicing Catholic, but he was honest.
The book is well designed with several images of Chartres, but because the photos are not on glossy stock, the bright colors of the stained glass do not "pop" off the page as they could. The introduction provides good historical context and the afterword offers a personal view after the author's visit to Chartres. 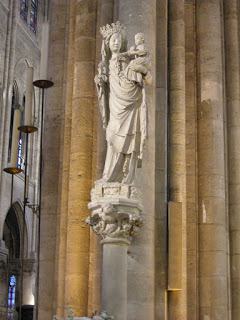 When the fire devastated Notre Dame de Paris in 2019, I looked at our photo albums and re-read our travel journals from those visits. In 2008, Pope Benedict XVI prayed Vespers in Notre Dame de Paris including the veneration of the Crown of Thorns and his comments resonate still with my memories of the Gregorian Masses (Novus Ordo with Gregorian Chant) we attended in Notre-Dame de Paris:
We are gathered in the Mother Church of the Diocese of Paris, Notre-Dame Cathedral, which rises in the heart of the city as a living sign of God’s presence in our midst. My predecessor, Pope Alexander III, laid its first stone, and Popes Pius VII and John Paul II honoured it by their presence. I am happy to follow in their footsteps, a quarter of a century after coming here to offer a conference on catechesis. It is hard not to give thanks to the Creator of both matter and spirit for the beauty of this edifice. The Christians of Lutetia had originally built a cathedral dedicated to Saint Stephen, the first martyr; as time went on it became too small, and was gradually replaced, between the twelfth and fourteenth centuries, by the great building we admire today. The faith of the Middle Ages built the cathedrals, and here your ancestors came to praise God, to entrust to him their hopes and to express their love for him. Great religious and civil events took place in this shrine, where architects, painters, sculptors and musicians have given the best of themselves. We need but recall, among so many others, the architect Jean de Chelles, the painter Charles Le Brun, the sculptor Nicolas Coustou and the organists Louis Vierne and Pierre Cochereau. Art, as a pathway to God, and choral prayer, the Church’s praise of the Creator, helped Paul Claudel, who attended Vespers here on Christmas Day 1886, to find the way to a personal experience of God. It is significant that God filled his soul with light during the chanting of the Magnificat, in which the Church listens to the song of the Virgin Mary, the Patroness of this church, who reminds the world that the Almighty has lifted up the lowly (cf. Lk 1:52). As the scene of other conversions, less celebrated but no less real, and as the pulpit from which preachers of the Gospel like Fathers Lacordaire, Monsabré and Samson transmitted the flame of their passion to the most varied congregations, Notre-Dame Cathedral rightly remains one of the most celebrated monuments of your country’s heritage. Following a tradition dating back to the time of Saint Louis, I have just venerated the relics of the True Cross and the Crown of Thorns, which have now found a worthy home here, a true offering of the human spirit to the power of creative Love.
Since I doubt that I'll ever return to Paris or Chartres or Amiens or Reims, I'm glad I have those memories and the feeling we often had while praying and worshipping in those Cathedrals, so well expressed by Pope Benedict in 2008:
Dear friends, during Vespers this evening, we are united in thought and prayer with the voices of the countless men and women who have chanted this psalm in this very place down the centuries. We are united with the pilgrims who went up to Jerusalem and to the steps of its Temple, and with the thousands of men and women who understood that their earthly pilgrimage was to end in heaven, in the eternal Jerusalem, trusting Christ to guide them there. What joy indeed, to know that we are invisibly surrounded by so great a crowd of witnesses!
Merry Christmas!
Our Lady, pray for us!
Posted by Stephanie A. Mann at 12:00 AM