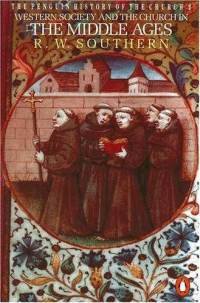 Edward Short, whose new edition of Newman's Certain Difficulties Felt by Anglicans in Catholic Teaching I reviewed last year here and here, writes about the English historian of the Middle Ages, R.W. Southern, for the Catholic World Report.
Describing a paper Southern delivered in 1988 to the St. John's College Historical Society, “The Truth about the Past”, Short highlights the medievalist's explanation of how history replaced scholastic theology at the University of Oxford as the organizing principle for understanding the truth about the past. Not just the discipline of history, doing research and verifying facts, but the interpretation of the results of that research to explain all the progress of the present: in other words, Whig history:

In reviewing how history was revisited from 1850 onwards in an attempt to fill the void left by the desuetude in which the scholastic tradition fell, Southern charted the failure of secular humanism. Initially, it was thought that the best means of studying history to establish general truths was through a study of institutions, particularly the development of Parliament and common law, and, by extension, the development of constitutional liberty, a development which could act as a useful guide not only to the conduct of life but to the challenges of empire, when the English still had an empire for which proconsuls had to be supplied.

Here, in embryo, was the Whig conception of history, according to which all history culminated in the triumph of Whig constitutionalism, and Southern vividly describes the welcome with which it was received two years after the Revolutions of 1848 rocked European institutions to their foundations. “It came as a huge liberation from a prison of despair to discover that here in our midst there was something like a divine instrument for the enlargement of human life,” Southern writes, “developing through the centuries from the earliest days.” Indeed, for those who had despaired of the general truths of Revelation, it offered nothing less than “a kind of secular embodiment of that force which had in the past been particularly associated with the now derelict pattern of Revelation.”

Consequently, History, not Theology, came to rule the academic roost. The claims made for the redemptive properties of historical study might now seem, as Southern says, “pure moonshine;” but it did not seem so in 1930, when Southern was an undergraduate. “Indeed, history had succeeded beyond all expectation in giving the university that central position in society which it had had in the thirteenth century and had gradually lost in the intervening centuries.” By 1900, one third of all undergraduates were studying history. Fifty years later, historical study had begun to lose and would never regain its fleeting centrality. . . .
Please read the rest there, especially for the explanation of why that the influence of historical study waned after 1950.
In the last part of the essay, Short almost convinces me that I should read R.W. Southern's two volume Scholastic Humanism and the Unification of Europe.
Almost.
Posted by Stephanie A. Mann at 12:00 AM