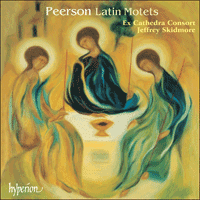 I just stumbled upon a recording of Latin Motets by this English composer, Martin Peerson (1590?–1651?)--and just in time too as Hyperion indicates there are few copies of the CD left--who was convicted of recusancy in 1606, but seems to have at least outwardly conformed to the Church of England.
One of his patrons was Fulke Greville, First Baron Brooke, a firm Calvinist, poet, statesman, and biographer of Sir Philip Sidney. Greville died horribly of infection after being stabbed by a servant: his doctors stuffed his wounds with pig fat which turned rancid!
Peerson (or Pearson or Pierson) may have been convicted of recusancy because of his connection to Ben Jonson, according to the CD liner notes:
Martin Peerson (c1572–1651) was probably born at March, Cambridgeshire, although the little that is known of his life relates to London and its immediate environs. An early connection was with the playwright Ben Jonson, for whose entertainment The Penates, Jonson’s May-Day production for the king and queen at Highgate in 1604, Peerson wrote the madrigal See, O see who is here come a-maying. Two years later Peerson, along with Jonson and others, was apparently convicted of recusancy. If Peerson had Catholic sympathies at that time they probably did not last very long, for he graduated BMus at Oxford (through Lincoln College) in 1613, for which acceptance of the Thirty-nine Articles was a requirement. . . .
Richard Rastall, who edited the edition of Peerson's works, also judges that merely composing motets based on Catholic liturgical texts does not indicate that the composer was a crypto-Catholic or Church Papist:
The composition of Latin motets does not necessarily imply that Peerson was a Catholic when he wrote them. These motets do not demonstrate the kind of underground protest that we can see in Byrd’s Latin compositions of the 1580s, for instance. Some of the texts can be traced to the pre-Reformation liturgy, but nothing here would have been unacceptable in the services of those Anglican institutions allowed to perform music with Latin texts. They could have been sung in Westminster Abbey, which is a royal peculiar and where, as already noted, Peerson was sacrist from 1623 until 1630. This would place them among Peerson’s late works, which stylistic considerations would suggest in any case.
Yet, he concludes:
If they did nothing else, these works would demonstrate Peerson’s mastery of this aspect of composition, and this is one reason why these pieces are regarded as probably relatively late works. But they show much more than this, and both listener and singer will be struck by the sheer performability of the lines and the dramatic and expressive effects of the texture as a whole. Such passages as his setting of ‘Jesu miserere mei’ near the beginning of No 1 (Deus omnipotens), or the wonderfully luminous passage for ‘neque dormiet qui custodit te’ in No 4 (Levavi oculos meos), show not merely a highly intelligent composer at work, but a human being of immense compassion and religious faith.
Makes it rather sad that we really so little of him--even his grave is gone because of the Fire of London and the destruction of Old St. Paul's--and what his religious convictions really were and what struggles he faced in reconciling them (or not) to the laws of his country and sovereign.
I've listened to the excerpts available at the Hyperion website, and look forward to listening to the entire recording when it arrives. I think it's intriguing that an "Interpretation of Rublev's Icon of the Trinity" (1995) by Sophia Hacker was used as the cover illustration.
Posted by Stephanie A. Mann at 12:00 AM