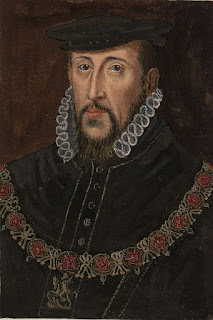 Henry FitzAlan, grandfather of St. Philip Howard, was born on April 23, 1512. He was the 12th Earl of Arundel and the last FitzAlan to hold that title, which upon his death on February 24, 1580, was inherited by Philip through his mother, Mary FitzAlan, Henry's third daughter, who had married Thomas Howard, the 4th Duke of Norfolk. FitzAlan served Henry VIII, Edward VI, Mary I, and Elizabeth I to various degrees of success and failure, sometimes in grave danger, according to the 1911 Encyclopedia Britannica entry:

He was one of the twelve counsellors nominated in Henry VIII.’s will to assist the executors, but he had little power during the protectorship of Somerset or the ascendancy of Warwick (afterwards duke of Northumberland), and in 1550 by the latter’s device he was accused of embezzlement, removed from the council, confined to his house, and fined £12,000—£8000 of this sum being afterwards remitted and the charges never being proved. Subsequently he allied himself with Somerset, and was implicated in 1551 in the latter’s plot against Northumberland, being imprisoned in the Tower in November. On the 3rd of December 1552, though he had never been brought to trial, he signed a submission and confession before the privy council, and was liberated after having been again heavily fined. As Edward’s reign drew to its close, Arundel’s support was desired by Northumberland to further his designs on the throne for his family, and he was accordingly reinstated in the council and discharged of his fine. In June 1553 he opposed Edward’s “device” for the succession, which passed over his sisters Mary and Elizabeth as illegitimate, and left the crown to the children of the duchess of Suffolk, and alone of the council refused the “engagement” to support it, though he signed the letters patent. On the death of Edward (July 6, 1553) he ostensibly joined in furthering the duke’s plans, but secretly took measures to destroy them, and according to some accounts sent a letter to Mary the same evening informing her of Edward’s death and advising her to retreat to a place of security. Meanwhile he continued to attend the meetings of the council, signed the letter to Mary declaring her illegitimacy and Lady Jane Grey’s right to the throne, accompanied Northumberland to announce to Jane her accession, and urged Northumberland to leave London and place himself at the head of the forces to attack Mary, wishing him God-speed on his departure. In Northumberland’s absence, he gained over his fellow-councillors, and having succeeded with them in getting out of the Tower, called an assembly of the corporation and chief men of the city, denounced Northumberland, and had Mary proclaimed queen, subsequently riding off to join her with the Great Seal at Framlingham. On the 20th of July he secured Northumberland at Cambridge, and returned in triumph with Mary to London on the 3rd of August, riding before her with the sword of state.

Rewarded for his assistance:

He was now made a privy councillor and lord steward, and was granted several favours and privileges, acting as high constable at the coronation, and obtaining the right to create sixty knights. He took a prominent part in various public acts of the reign, was a commissioner to treat for the queen’s marriage, presided at the trial of the duke of Suffolk, assisted in suppressing Wyatt’s rebellion in 1554, was despatched on foreign missions, and in September 1555 accompanied Philip to Brussels. The same year he received, together with other persons, a charter under the name of the Merchant Adventurers of England, for the discovery of unknown lands, and was made high steward of Oxford University, being chosen chancellor in 1559, but resigning his office in the same year. In 1557, on the prospect of the war with France, he was appointed lieutenant-general of the forces for the defence of the country, and in 1558 attended the conference at the abbey of Cercamp for the negotiation of a peace. He returned to England on the death of Mary in November 1558, and is described to Philip II. at that time as “going about in high glee, very smart” and with hopes of marrying the queen, but as “flighty” and of “small ability.”

Things did not go smoothly for him under Elizabeth I because he was a staunch Catholic:

He was reinstated in all his offices by Elizabeth, served as high constable at her coronation, and was visited several times by the queen at Nonsuch in Surrey. As a Roman Catholic he violently opposed the arrest of his co-religionists and the war with Scotland, and in 1560 came to blows with Lord Clinton in the queen’s presence on a dispute arising on those questions. He incurred the queen’s displeasure in 1562 by holding a meeting at his house during her illness to consider the question of the succession and promote the claims of Lady Catherine Grey. In 1564, being suspected of intrigues against the government, he was dismissed from the lord-stewardship and confined to his house, but was restored to favour in December. In March 1566 he went to Padua, but being summoned back by the queen he returned to London accompanied by a large cavalcade on the 17th of April 1567. Next year he served on the commission of inquiry into the charges against Mary, queen of Scots.

He got involved in Norfolk's plots to become Mary, Queen of Scots' fourth husband (even though the Earl of Bothwell, imprisoned in Denmark, was still alive), and worked with Philip II of Spain to overthrow Elizabeth: 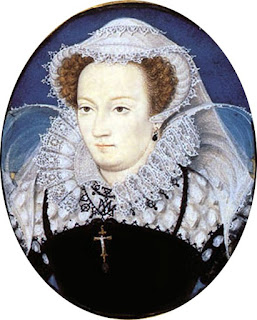 Subsequently he furthered the marriage of Mary with the duke of Norfolk, his son-in-law, together with the restoration of the Roman Catholic religion and government, and deposition of Elizabeth, in collusion with Spain. He made use of the incident in 1568, of the seizure of treasure at Southampton intended for Philip, as a means of effecting Cecil’s overthrow, and urged upon the Spanish government the stoppage of trade. He is described in 1569 to Philip as having “good intentions,” “whilst benefiting himself as he was very needy.” In January he alarmed Elizabeth by communicating to her a supposed Spanish project for aiding Mary and replacing her on her throne, and put before the queen in writing his own objections to the adoption of extreme measures against her. In June he received with Norfolk and Lumley 6000 crowns from Philip. In September, on the discovery of Norfolk’s plot, he was arrested, but not having committed himself sufficiently to incur the charge of treason in the northern rebellion he escaped punishment, was released in March 1570, and was recalled by Leicester to the council with the aim of embarrassing Cecil. He again renewed his treasonable intrigues, which were at length to some extent exposed by the discovery of the Ridolfi plot in September 1571. He was once more arrested, and not liberated till December 1572 after Norfolk’s execution.

He is fortunate to have died in bed after being nursed by his eldest daughter, Jane Lumley, Baroness Lumley at Arundel Castle, before she predeceased him in 1578. He was buried in the chapel. His son and heir Henry had died in 1556; Jane and John Lumley, Baron Lumley had no children; and Thomas Howard, the 4th Duke of Norfolk and his son-in-law having been executed on June 2, 1572, Philip Howard became the 13th Earl of Arundel. Sometimes Henry is designated the 19th Earl of Arundel and Philip the 20th.
Posted by Stephanie A. Mann at 12:30 AM