From 2008: Pope Benedict XVI at the Cathedral of Notre Dame 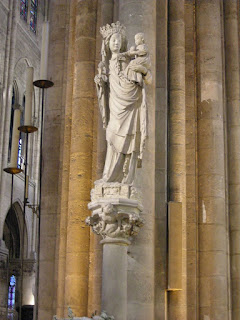 When I came home from Mass and lunch yesterday, the news story about the devastating fire at Notre Dame de Paris was on television. I remembered all the times Mark and I visited Notre Dame, attended Mass at Notre Dame, or just walked by it. When Pope Benedict XVI prayed Vespers in Notre Dame on September 12, 2008, we watched it on EWTN. He spoke about the Cathedral in terms of its legacy and its beauty as a gift of God:

Blessed be God who has brought us together in a place so dear to the heart of every Parisian and all the people of France! Blessed be God, who grants us the grace of offering him our evening prayer and giving him due praise in the very words which the Church’s liturgy inherited from the synagogue worship practised by Christ and his first disciples! Yes, blessed be God for coming to our assistance – in adiutorium nostrum – and helping us to offer him our sacrifice of praise!

We are gathered in the Mother Church of the Diocese of Paris, Notre-Dame Cathedral, which rises in the heart of the city as a living sign of God’s presence in our midst. My predecessor, Pope Alexander III, laid its first stone, and Popes Pius VII and John Paul II honoured it by their presence. I am happy to follow in their footsteps, a quarter of a century after coming here to offer a conference on catechesis. It is hard not to give thanks to the Creator of both matter and spirit for the beauty of this edifice. The Christians of Lutetia had originally built a cathedral dedicated to Saint Stephen, the first martyr; as time went on it became too small, and was gradually replaced, between the twelfth and fourteenth centuries, by the great building we admire today. The faith of the Middle Ages built the cathedrals, and here your ancestors came to praise God, to entrust to him their hopes and to express their love for him. Great religious and civil events took place in this shrine, where architects, painters, sculptors and musicians have given the best of themselves. We need but recall, among so many others, the architect Jean de Chelles, the painter Charles Le Brun, the sculptor Nicolas Coustou and the organists Louis Vierne and Pierre Cochereau. Art, as a pathway to God, and choral prayer, the Church’s praise of the Creator, helped Paul Claudel, who attended Vespers here on Christmas Day 1886, to find the way to a personal experience of God. It is significant that God filled his soul with light during the chanting of the Magnificat, in which the Church listens to the song of the Virgin Mary, the Patroness of this church, who reminds the world that the Almighty has lifted up the lowly (cf. Lk 1:52). As the scene of other conversions, less celebrated but no less real, and as the pulpit from which preachers of the Gospel like Fathers Lacordaire, Monsabré and Samson transmitted the flame of their passion to the most varied congregations, Notre-Dame Cathedral rightly remains one of the most celebrated monuments of your country’s heritage. Following a tradition dating back to the time of Saint Louis, I have just venerated the relics of the True Cross and the Crown of Thorns, which have now found a worthy home here, a true offering of the human spirit to the power of creative Love.

We agreed with this sentiment as we had often felt it during Mass or before the Blessed Sacrament behind the High Altar:

Dear friends, during Vespers this evening, we are united in thought and prayer with the voices of the countless men and women who have chanted this psalm in this very place down the centuries. We are united with the pilgrims who went up to Jerusalem and to the steps of its Temple, and with the thousands of men and women who understood that their earthly pilgrimage was to end in heaven, in the eternal Jerusalem, trusting Christ to guide them there. What joy indeed, to know that we are invisibly surrounded by so great a crowd of witnesses!

This is a precious document of the Vespers of the Monday of Holy Week, chanted in Notre Dame before it closed its doors yesterday--before the fire.

Seeing the great cathedral on fire, being destroyed before my eyes through those digital images, was heart-breaking to me. I looked through our photo albums and cried: I was there with Mark and he was there with me and we were in awe.

Image credit, published under a Creative Commons License
Posted by Stephanie A. Mann at 12:30 AM