April 11: A Decollation, A Burning, and A Coronation 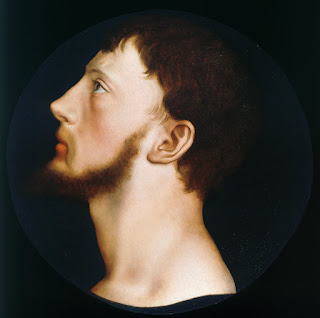 On April 11, 1554, Thomas Wyatt the Younger was executed on Tower Hill for leading his eponymous rebellion against Mary I. I have to post on this event for three reasons: using the words "eponymous" and "decollation" and using this great profile portrait.The Wyatt Rebellion, as this site notes, failed completely:The plan itself involved too many ‘ifs’ and ‘buts’ if it was to succeed. The noble conspirators planned to remove Mary, instate Elizabeth as Queen and arrange for her to marry Edward Courtenay – a man Mary had already rejected as a husband. [It sounds like the Gunpowder Plot!]The plan was for three rebellions to take place in separate parts of the country. They would occur at the same time – in the Midlands, the West Country and Kent. The plan was that the government would not know which one to put down first and each would blossom as a result of their localised success and attract more and more supporters among the common people.The French Navy would blockade the English Channel with eighty ships so that the Habsburgs would not be able to help Mary.The plan failed miserably. The Imperial Ambassador, Simon Renard, had heard rumours that such a plot existed and informed the Lord Chancellor, Stephen Gardner [sic], of his concerns. Gardner brought in Courtenay for questioning as Renard had mentioned his name. The records stated that Gardner’s questioning was ‘robust’ and Courtenay was not a man who could stand up to this. Edward Courtenay told Gardner all that he knew about the plot so that the government knew about the plot even before it had begun – even if Courtenay would not have known about the details.The ‘uprisings’ in the Midlands and the West Country were a failure as few of the people there gave Carew and the Duke of Suffolk the support they needed for success. It seems that though there was concern about Mary marrying a foreigner, loyalty to the Queen took precedence. Those in the Midlands did not want to commit treason (Suffolk raised a force of just 140 men) while many in the West were Catholic. . . .

Only two of the leaders were executed for their treason – Wyatt and the Duke of Suffolk. Other minor nobles were also executed but some – guilty of treason – were spared. In total about 90 rebels were executed but many of the common people who had joined Wyatt and survived were spared. Two other casualties were Lady Jane Grey and her husband Guildford Dudley. Both had been in prison since the failed attempt to put Lady Jane on the throne and had nothing to do with Wyatt’s rebellion. However Mary felt that she could no longer risk anyone rallying to Lady Jane’s cause – hence her execution – especially as her father, the Duke of Suffolk, had been involved in this plot and had been executed for treason.

I find it interesting that the website does not mention that Queen Mary had rallied her people to defend her and their city. Even John Foxe, who had no reason to present Mary in a good light, recounted her bravery, her devotion, and her resolve in her speech at Guildhall:

I am your Queen, to whom at my coronation, when I was wedded to the realm and laws of the same (the spousal ring whereof I have on my finger, which never hitherto was, not hereafter shall be, left off), you promised your allegiance and obedience to me…. And I say to you, on the word of a Prince, I cannot tell how naturally the mother loveth the child, for I was never the mother of any; but certainly, if a Prince and Governor may as naturally and earnestly love her subjects as the mother doth love the child, then assure yourselves that I, being your lady and mistress, do as earnestly and tenderly love and favour you. And I, thus loving you, cannot but think that ye as heartily and faithfully love me; and then I doubt not but we shall give these rebels a short and speedy overthrow.

Some details about Wyatt's execution for treason; although he was beheaded and therefore did not endure the full agony of being hanged, drawn, and quartered, his remains were eviscerated and quartered as a the body of a traitor would be:

After he was beheaded, his body was subjected to all the barbarities that formed part of punishment for treason. Next day his head was hung to a gallows on ‘Hay Hill beside Hyde Park,’ and subsequently his limbs were distributed among gibbets in various quarters of the town (Machyn, Diary, p. 60). His head was stolen on 17 April.

On April 11, 1612 the last execution for heresy took place in England, during the reign of James I. Edward Wightman was actually burned at the stake twice:
Wightman seems to have denied the doctrine of the Trinity, denied that Jesus Christ was God, denied the Resurrection and the legitimacy of Holy Communion and maintained that he himself was both the Holy Spirit and, though not himself divine, the Messiah appointed by God as the saviour of the world. From a modern perspective it seems clear that he had gone completely insane.

Wightman was eventually put on trial in the diocesan court in Lichfield, which in December pronounced him guilty of blasphemy and of promoting the heresies of figures ranging from Simon Magus to the Arians, the Manicheans and the Anabaptists. He was sent to the stake in the square in Lichfield in March 1612. When the flames began to scorch him he cried out in pain and it was thought he wanted to recant. Some of the crowd of spectators rushed to rescue him, though getting burned themselves. He was taken back to prison to recover, but when he was brought before the court again he refused to sign a formal recantation and on Easter Saturday in April he was sent back to the stake and was this time burned to death. 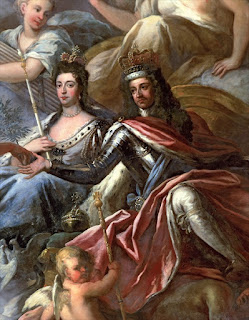 Finally, on April 11, 1689, William of Orange and Mary his wife and the daughter of the overthrown and deposed James II were crowned together in Westminster Abbey. A few notes from this blog, which indicate that we don't have all the details about the regalia used at this double coronation:

As we know, Mary and William were crowned as joint-monarchs in a ceremony at Westminster Abbey on 11 April 1689. An interesting note, the Archbishop of Canterbury, who typically presides over the coronation, refused to do so because he continued to support James II. So for this coronation, the bishop of London crowned the new queen and king (things like this happened several times in the Middle Ages, but there would often be a second coronation done with the AB of Canterbury for sake of continuity and because of fears over the illegitimacy of the ceremony).  . .

King Edward’s Chair (or St. Edward’s Chair or the Coronation Chair) has been used for the coronation of English (and British later on) since Edward II, with the exceptions of Edward V and Edward VIII, both of whom were not crowned. Oddly enough, Mary II was not crowned in the chair as well. A second chair was constructed before the coronation for Mary to sit in. . . .

For the coronation of Mary and William there is no mention of the use of St. Edward’s Crown. Instead, some of the sources state that they wore their pair of imperial state crowns. A second crown, then, was either used from a previous queen (perhaps the consort of James II?) or a new crown imperial state crown was made for one or both of the new monarchs.
Posted by Stephanie A. Mann at 12:30 AM

Email ThisBlogThis!Share to TwitterShare to FacebookShare to Pinterest
Labels: April 11, Burning at the Stake, coronation, Edward Wightman, Executions, Heresy, James I, Mary I, the Wyatt Rebellion, Thomas Wyatt the Younger, Treason, William and Mary of England