"A Relic of Papistry?" The Simnel Cake

History Today shares this post about the history of the Simnel Cake, a lighter fruit cake enjoyed either on Laetare Sunday as a break from the Lenten fast or at Easter. Alexander Lee cites the tradition as described by Elizabeth Gaskell, novelist and biographer of Charlotte Bronte, as she grew up in Cheshire after her mother's death:

Writing to her friend, the poet Mary Howitt, on 18 August 1838, she recalled with delight the local festivals she had enjoyed as a girl. There was ‘Lifting Monday’ and ‘Lifting Tuesday’, when the village girls would burst into houses and lift the menfolk into the air until they were given a gift. Then there were the May Day celebrations, when the streets were decorated with coloured sand and branches were hung above everyone’s doors. But by far the tastiest time of year was mid-Lent Sunday – also known as Laetare or Mothering Sunday. For then, Elizabeth explained:


Instead of frumenty [a sort of sweet porridge], we eat Simnel cake: a cake made variously, but always with saffron for its principal ingredient. This I should fancy was a relic of Papistry, but I wonder how it originated. Lambert Simnel, the imposter in Henry the Seventh’s time was a baker’s son, I think. The show windows are filled with them, [and] high and low eat them.

Since Gaskell’s day, simnel cake has changed a great deal. Now eaten at Easter, rather than in the middle of Lent, it tastes – and looks – quite different from how it did in the early 19th century. Although it is still a light, rich fruit cake, packed with raisins, sultanas and lemon zest, saffron is now rarely used. Two layers of marzipan or almond paste – unknown to the Georgian recipe – are also added, one in the middle and one on top; and 11 marzipan balls – said to represent the 11 faithful apostles – are generally used for decoration. The method is different, too. Whereas it was once boiled, then baked, it is today baked and then grilled. 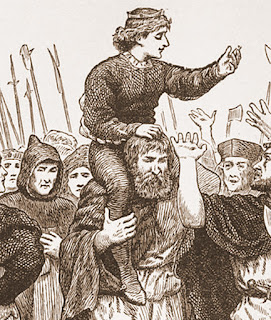 For some time, simnel remained an ambiguous word. In the 15th and 16th centuries, it continued to be used primarily to describe a type of flour – or occasionally as a metonym for baking generally. Lambert Simnel, the Tudor pretender who briefly threatened the rule of Henry VII in 1487, was, as Gaskell noted, probably the son of a baker who owed his name to the flour that was his father’s stock in trade. But at the same time, simnel could also be used to refer to any sort of bread or cake made with the flour. When Myles Coverdale produced his English translation of the Bible in 1535, he rendered Ezekiel 16:19 – which in the Vulgate reads Et panem meum quem dedi tibi, similam, et oleum, et mel (‘And my bread, which I gave to you, the flour and oil and honey’) – as: ‘Thou didst eate nothinge but symnels, honney and oyle’; but when Thomas Cogan’s The Hauen of Health (1584) was published five decades later, it included a reference to ‘Cakes of all forms, Simnels, Cracknels, Bunnes … and other things made of wheate flour’.

Lambert Simnel was the pretender who survived during Henry VII's reign. He was pardoned, employed by the king in his kitchen and as a falconer, married, and died between 1525 and 1535. He may have been the father of Richard Simnel, an Augustianian canon at St. Osgth's Priory in Essex, suppressed in 1539.
Posted by Stephanie A. Mann at 12:30 AM