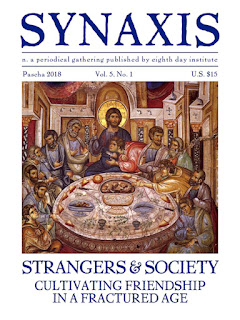 The latest issue of Synaxis is out. Eighth Day Institute (EDI) held a Benedict Hour Friday afternoon and evening at The Ladder to distribute the publication to local members.

As you'll note from the Table of Contents, Editor/Director/Doctor Doom selected a piece of mine based on a lecture I offered at the 2017 Symposium on Newman's The Idea of a University, focused on the place of Theology in a university education. From the description of the presentation:

Abstract: In 1854, John Henry Newman was asked to establish a Catholic university in Ireland. Although his project for the university failed, his great vision for higher education, The Idea of a University, has had great influence on the idea of a liberal arts education. His warning that Theology, the Queen of the Sciences, must have a central role in the curriculum, has not had the influence it should on secular universities, however, and Stephanie Mann will discuss how that circumstance has led to the problem we are addressing today: if the college educated public is not aware of the meaning of theology, how can a theologian influence society and culture?

As I noted, Director Doom (Erin Doom) excerpted the essay I wrote based on that presentation. Here's one of the sections he had to leave out (in the interests of space) at the end of the essay:

The Spirit of Liberalism in Religion

He knew, however, that his audience was affected by the loss of Theological truth in his own age. Newman called it “the spirit of liberalism in religion”, the idea that there is no truth in religion. Remember that he cited this idea as a reason for some universities omitting Theology from the curriculum. When he was named a Cardinal by Pope Leo XIII in 1879, Newman made his memorable biglietto speech, noting that he had resisted this spirit for the past fifty years of his life:

Liberalism in religion is the doctrine that there is no positive truth in religion, but that one creed is as good as another, and this is the teaching which is gaining substance and force daily. It is inconsistent with any recognition of any religion, as true. It teaches that all are to be tolerated, for all are matters of opinion. Revealed religion is not a truth, but a sentiment and a taste; not an objective fact, not miraculous; and it is the right of each individual to make it say just what strikes his fancy. . . . Since, then, religion is so personal a peculiarity and so private a possession, we must of necessity ignore it in the intercourse of man with man. If a man puts on a new religion every morning, what is that to you? It is as impertinent to think about a man's religion as about his sources of income or his management of his family. Religion is in no sense the bond of society.

Hitherto the civil Power has been Christian. Even in countries separated from the Church, as in my own, the dictum was in force, when I was young, that: "Christianity was the law of the land". Now, everywhere that goodly framework of society, which is the creation of Christianity, is throwing off Christianity.

Newman saw this danger spreading and proves a prophet for our time, noting that once Christian Theology has been eliminated from civil discourse, authorities will

. . . substitute first of all a universal and a thoroughly secular education, calculated to bring home to every individual that to be orderly, industrious, and sober, is his personal interest. Then, for great working principles to take the place of religion, for the use of the masses thus carefully educated, it provides—the broad fundamental ethical truths, of justice, benevolence, veracity, and the like; proved experience; and those natural laws which exist and act spontaneously in society, and in social matters, whether physical or psychological; for instance, in government, trade, finance, sanitary experiments, and the intercourse of nations. As to Religion, it is a private luxury, which a man may have if he will; but which of course he must pay for, and which he must not obtrude upon others, or indulge in to their annoyance.

Thus, even when a public theologian speaks today on abortion, marriage, family, religious freedom, human dignity, poverty, health care, etc., the theological grounding of her arguments has been vitiated and utilitarianism or mere sentiment has taken its place in her audience’s ears. Newman saw it coming—he warned the Church; he warned his country—and he was mostly ignored.

If you are an EDI member, you'll receive a copy--if you're not, I think that Eighth Day Books will be selling them; or you could join the cause of renewing culture through faith and learning and read this and many other excellent essays.
Posted by Stephanie A. Mann at 12:30 AM