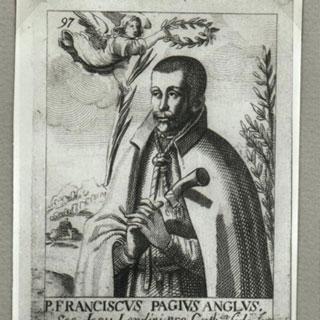 Blessed Francis Page, SJ was born in Antwerp of English Protestant parents. He went to England and fell in love with Catholic girl who would not marry him because he was Protestant, so he studied to become a Catholic, with unforeseen results, according to the Jesuit Curia in Rome:

The more he studied religion, the more he felt drawn to the priesthood, much to the young woman's chagrin. The young student went to a Jesuit, Father John Gerard, for religious instruction. When Gerard was arrested and incarcerated in the Tower of London, Francis Page stood outside the prison day after day. His suspicious actions led to a brief arrest, but he decided to follow the call and crossed the Channel to Rheims, France, where he entered the English College.

When he returned to London after being ordained in 1600, he was able to do ministry for over a year. He narrowly escaped arrest one time just as he was about to begin celebrating Mass. He barely had time to remove his vestments and then sit in the congregation as though waiting for the priest to appear. The woman who was hosting the Mass in her home, Anne Line, helped him escape but she herself was arrested and later executed for harboring a priest. She was canonized in 1970.

Fourteen months later Page was not so fortunate when he was recognized by a woman who made it her business to turn priests in so she could collect the reward. He took refuge in an inn but she raised such an outcry that the innkeeper kept Page until authorities arrived to seize him. Page's trial on April 19, 1602 led to a predictable condemnation to die for high treason. He had applied to become a Jesuit but was not able to go back to the Continent to enter the novitiate. The night before he was killed he was allowed to join a Jesuit imprisoned in the adjoining cell; the young priest took vows as a Jesuit, a fact he proudly proclaimed the next day as he stood at the gallows, just before he was hung and then dismembered.

Venerable Thomas Tichborne is one of two brothers in the recusant Catholic family (which included Chidiock Tichborne of the Babington Plot, their cousin) who suffered martyrdom:

Born at Hartley, Hampshire, 1567; martyred at Tyburn, London, 20 April, 1602. He was educated at Rheims (1584-87) and Rome, where he was ordained on Ascension Day, 17 May, 1592. Returning to England on 10 March, 1594, he laboured in his native county, where he escaped apprehension till the early part of 1597. He was sent a prisoner to the Gatehouse in London, but in the autumn of 1598 was helped to escape by his brother, Ven. Nicholas Tichborne, and Ven. Thomas Hackshot, who were both martyred shortly afterwards. Betrayed by Atkinson, an apostate priest, he was re-arrested and on 17 April, 1602, was brought to trial with Ven. Robert Watkinson (a young Yorkshire man who had been educated at Rome and ordained priest at Douai a month before) and Ven. James Duckett, a London bookseller. On 20 April he was executed with Ven. Robert Watkinson and Ven. Francis Page, S.J. The last named was a convert, of a Middlesex family though born in Antwerp. He had been ordained at Douai in 1600 and received into the Society of Jesus while a prisoner in Newgate. Ven. Thomas Tichborne was in the last stages of consumption when he was martyred.This blog recounts the story of Blessed Robert Watkinson, as "related by Fr Bowden, C.O. in his Mementoes of the Martyrs of England and Wales":

He was born at Hemingborough, Yorkshire, educated at Douay and Rome, and ordained priest at Arras. In 1602 he crossed to England, and, being in ill health, put himself under the care of a physician in London. A few days later, while he was walking in the street, he met a stranger, in appearance a venerable old man, who saluted him with these words, “Jesus bless you, sir, you seem to be sick and troubled with many infirmities; but be of good cheer, for within these four days you shall be cured of all.” And so it happened, for the next day, Saturday, April 17, through the treachery of an apostate priest, he was apprehended, tried and condemned, and was executed at Tyburn on the Tuesday following, April 20, and so found rest. On the morning of execution he found means to celebrate Mass in prison; those who were present, and especially Mr Henry Owen, his server and prisoner for conscience' sake, saw about his head while he was celebrating a bright light like a ray of glory, which from the consecration to the communion rested directly over his head and then disappeared. This martyr was only twenty-three years old.