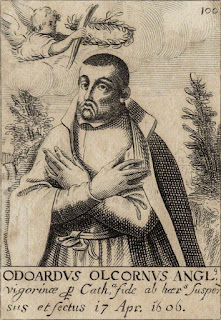 Two Jesuits suffered martyrdom on April 7, 1606 in connection with the Gunpowder Plot early in James I's reign--although they had no involvement with the Plot, the fact that they were companions and associates of Father Henry Garnet--and in fact, were captured with him after hiding for days in different hiding places within Hindlip Hall. Also captured that day was the designer and builder of those hiding places, Jesuit lay brother Nicholas Owen. The two lay brothers were in one hiding place and the two priests in another. The pursuivants could not find them--searching the house for days--but they finally had to leave their sanctuaries because of hunger and thirst. Blessed Edward Oldcorne was a Jesuit priest, ordained in Rome, Italy, and received into the Society in 1587. Worked in the English mission in Worcestershire for 16 years. Father Edward developed throat cancer, but kept preaching through the pain. He made a pilgrimage to the shrine of Saint Winifred of Wales in Flintshire to seek a cure; his cancer healed, and he returned strong and healthy to his vocation.Edward fell victim to the revenge following the Gunpowder Plot, a foolish conspiracy hatched by a small group of frustrated Catholic Englishmen to blow up the king and parliament. All it did was provide an excuse for renewed persecution of Catholics, especially Jesuits. Edward was arrested, falsely accused, and tortured on the rack for five days for information about the Plot. He was hung, drawn and quartered on April 7, 1607 with Blessed Ralph Ashley, SJ. Blessed Ralph Ashley worked as a cook at Douai College. Entered the English College at Valladolid on 28 April 1590 where he became a Jesuit lay brother. Ill health forced him to leave college and return to England. Along the way he was captured by Dutch heretics; he stood up to them and explained their errors. Finally landed in England on 9 March 1598.

Servant and assistant to Blessed Edward Oldcorne. Arrested on 23 January 1606 at Hindlip House, near Worcester, England in connection with the Gunpowder Plot, and for the crime of helping a priest. Transferred to the Tower of London on 3 February 1606 along with Father Henry Garnet and Saint Nicholas Owen. Tortured for information on other Catholics and for the hiding places of priests. When they could get no information from him, he was transferred to Worcester, and condemned for his faith.
Of the four Jesuits captured at Hindlip Hall, three were recognized as martyrs by the Catholic Church and beatified or canonized. The torture and questioning of the two lay Jesuit brothers, St. Nicholas Owen and Blessed Ralph Ashley, was focused on discovering more hiding places like the ones the four Jesuits had been hiding in at Hindlip Hall. Owen died as a result of the torture meted out to him. Blessed Edward Oldcorne, because he was found with Garnet, was questioned about the plot. Father Henry Garnet has not been proclaimed a martyr by the Church, I presume because of questions about his involvement in the Gunpowder Plot. According to the old Catholic Encyclopedia (1909): It is a matter of regret that we have as yet nothing like an authoritative pronouncement from Rome on the subject of Garnet's martyrdom. His name was indeed proposed with that of the other English Martyrs and Confessors in 1874, and his cause was then based upon the testimonies of Bellarmine and the older Catholic writers, which was the correct plea for the proof of Fama Martyrii, then to be demonstrated. But these ancient authorities are not acquainted with Garnet's actual confessions which were not known or published in their time. The consequence was that, as the discussion proceeded, their evidence was found to be inconclusive, and an open verdict was returned; thus his martyrdom was held to be neither proved nor disproved. This of course led to his cause being "put off" (dilatus) for further inquiry, which involves in Rome a delay of many years. "A delay of many years" indeed.
Posted by Stephanie A. Mann at 12:30 AM