St. Thomas More, the Devil, and the Law 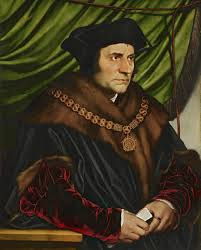 I happened to see Alan Dershowitz, Professor of Law, Emeritus and Felix Frankfurter Professor of Law, Emeritus of Harvard Law School, known as “the nation’s most peripatetic civil liberties lawyer” and one of its “most distinguished defenders of individual rights,” among other epithets, cite Robert Bolt's A Man for All Seasons during a television interview. He referenced the lines in the play when St. Thomas More explains to William Roper that he would give the benefit of law to the Devil when Roper, Margaret, and Alice all want him to arrest and charge Richard Rich with something, even though he hasn't broken any law. They are frustrated that More lets Rich leave:

MORE: And go he should, if he was the Devil himself, until he broke the law!

ROPER: So now you'd give the Devil benefit of law!

MORE: Yes. What would you do? Cut a great road through the law to get after the Devil?

ROPER: I’d cut down every law in England to do that!

MORE: Oh? And when the last law was down, and the Devil turned round on you--where would you hide, Roper, the laws all being flat? This country's planted thick with laws from coast to coast--man's laws, not God's--and if you cut them down--and you're just the man to do it--d'you really think you could stand upright in the winds that would blow then? Yes. I'd give the Devil benefit of law, for my own safety's sake.

I know that in some speeches More makes in the play, Bolt used actual words and phrases from More's letters and other documents, but I'm not sure that More ever used those words, although they could be an adaptation of More's statement that “If the parties will at my hands call for justice, then, all were it my father stood on the one side, and the devil on the other, his cause being good, the devil should have right.” 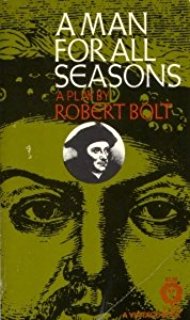 Other lawyers have been impressed by that speech from A Man for All Seasons. For example, I found this review of a production at Harvard in the Harvard Crimson (July 15, 1966). The anonymous reviewer begins his or her commentary with that scene and adds this anecdote:

Sir Howard Beale, the Australian ambassador to this country, took the late Mr. Justice Frankfurter to see Bolt's play in New York in 1962. Beale recounts that the Justice could scarcely contain his excitement during the scene just set out, and as it ended Frankfurter whispered in the dark. "That's the point, that's it, that's it!"

The reviewer answers his or her own question based on Bolt's text and the performance:

Bolt's answer, as I find it in his text and the reading of it by the Summer School Repertory Theater, is two-fold. First, More believes, almost to the last, that his lawyerly skill will preserve his neck. We find him replying to Roper's fears of an adversary. "He's not the Devil, son Roper, he's a lawyer! And my case is watertight!" Faced with the possibility of a test oath. More, good lawyer that he is, wants to see the statute--"But what is the wording?...It will mean what the words lay!...It may be possible to take it. Or avoid it. Have we a copy of the Bill?" Enough laws are still planted in England. More thinks, for him to stand whatever winds may blow. The sources that tell us of More's life--his books, his letters, the life by son-in-law Roper, those by the mysterious "Ro: Ba:" and by Nicholas Harpsfield, the records of his trial, stray accounts of his execution--these sources show the truth of this view. A point it is, but not the point (nor did Mr. Justice Frankfurter think it was--his words were a comment on law, not on literature or history. [sic]

I presume the parenthesis ended with the sentence. The second part of the answer is More and his conscience and I agree with the reviewer's response to Bolt's interpretation of More's conscience:

The second point that Bolt puts forward is More's insistence on the inviolacy of his conscience--he would not say that which he did not believe. And here is where I think Bolt goes wrong. More was a man of conscience and the motive Bolt ascribes to him was a strong one, but Bolt interprets this concept of conscience in an oddly modern way. We find Mr. Seltzer speaking often of "self" and endeavoring to explain his action. He speaks too of God, but I come away from text and performance feeling that this More's God is one Sir Thomas would not have recognized. Bolt gives us almost a Tillichian "ground of being," not the deity of A.D. 1535. When More on the scaffold protested that he "died the King's good servant, but God's first," he, I think, had a simpler more direct faith than Bolt has been able to find words for, a belief whose awful (in its original sense, if you please) intensity we can scarcely comprehend and which Mr. Seltzer, for all the wit and warmth and beauty of his artistry, has not captured.

Another famous lawyer, Robert H. Bork, also commented on that passage in a presentation to the Thomas More Society of America in 1985 (the 450th anniversary year of More's execution), reflecting on Bolt's depiction of More:

In this, Robert Bolt's A Man For All Seasons got the man remarkably right. (I was somewhat surprised to discover this since I had assumed that Bolt, like many writers of historical dramas, had taken liberties to make his subject more interesting or appealing.) In one scene, More, then the Lord Chancellor, argues with his family who are urging him to arrest Richard Rich. His daughter, Margaret, says, "Father, that man's bad." More answers, "There is no law against that." His son-in-law, Roper: "There is! God's law!" More: "Then God can arrest him .... The law, Roper, the law. I know what's legal not what's right. And I'll stick to what's legal . . . . I'm not God. The currents and eddies of right and wrong, which you find such plain sailing, I can't navigate. I'm no voyager. But in the thickets of the law, oh, there I'm a forester." Why, then, this obedience to constituted authority and to law, even when he regarded them as immoral? It was, in part, fear of the alternative to law. An Elizabethan play, that may have been written by Shakespeare, has More quell rioters against aliens in London with this speech:

MORE: Grant them removed, and grant that this your noise
Hath chid down all the majesty of England.
Imagine ...
That you sit as kings in our desires
Authority quite silenced by your brawl
And you in ruff of your opinions clothed,
What had you got? I'll tell you. You had taught
How insolence and strong hand should prevail,
How order should be quelled; and by this pattern
Not one of you should live an aged man;
For other ruffians, as their fancies wrought
With self same hand, self reasons and self right
Would shark on you; and men like ravenous fishes
Would feed on one another.

Bork continued to think about Thomas More and the law: in 1999, First Things published his further reflections on More's respect for authority and veneration for the law with insights from Peter Ackroyd's recently-published biography. He adapted sections from the earlier article:

To understand More, then, it is equally important to realize his absolute commitment to law and his recognition of the fallibility of human moral reasoning. To be ruled by each individual’s moral beliefs is to invite, indeed to guarantee, social tumult and disorder. The law alone is uniform, a composite or compromise of varying moral assessments, to be applied to all alike, regardless of personal attitudes about the persons involved: father or devil, it makes no difference. If an acceptable mix of freedom and order are to be maintained, obedience to law must be accepted as a primary moral duty.

The veneration More gave to law, he also gave, and for the same reason, to constituted authority. More served Henry VIII, a sovereign whose policies he often believed to be immoral or profoundly unwise. He was under no illusions about his king, even as we should be under no illusions about our governors or even the democratic will. When Roper rejoiced at how friendly Henry was to More, he replied, “I have no cause to be proud thereof, for if my head could win him a castle in France it should not fail to go.” Yet he did not disobey; he might give contrary advice, but, the policy or the law once decided upon, he complied. He disapproved of Henry’s ruinous war with France, but, as Speaker, he asked Parliament for extraordinary and unpopular taxes to support that war. Later, when More was Lord Chancellor, and it was proposed to put Parliament in control of the Church, Richard Marius tells us “More was sick at heart at the prospect . . . [but] he could not control events. Worse, he was a respectable figurehead, kept by the government to lend it whatever authority his reputation gave him, serving by his very presence in the post of Lord Chancellor a cause which was to him abominable.” He wanted to resign. “Yet he could not resign, for to do so would have been to run the risk of making his opposition to the king public.”

Henry commanded More to speak in the House of Lords to say that the king was pursuing his divorce from Catherine as a matter of religious scruple and not for love of any other woman. In doing so, More pointed out that various universities agreed the first marriage had been unlawful. Someone asked More’s opinion and he replied that he had given it to the king and said no more. As Chambers put it, “Respect for authority . . . was the foundation of [More’s] political thinking.” He presented the king’s case, but would not go an inch further.
Posted by Stephanie A. Mann at 12:30 AM