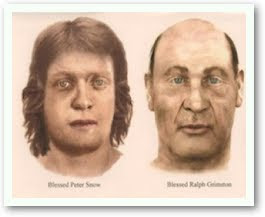 Peter Snow, of Ripon, England, was ordained a priest in Soissons, France in 1591. After returning to England, he served for seven years in Yorkshire, ministering to his fellow Catholics persecuted under Queen Elizabeth I. In the spring of 1598, he received assistance in his travels from a Yorkshire native, Ralph Grimston, a married layman from Nidd. Ralph had previously suffered imprisonment for opening his home to Catholic priests. On or around May 1, 1598, Father Snow and Ralph were captured while journeying together to York. Father Snow was condemned to death by hanging, drawing, and quartering for being a priest. Ralph was condemned to death by hanging for having assisted Father Snow and for having attempted to prevent the priest’s arrest when they were caught. They suffered martyrdom together on June 15 at York.The Catholic Cathedral at Leeds, dedicated to St. Anne, has their skulls as relics, and the University of Dundee reconstructed their faces based on their skulls (just like they do on Bones and all the other forensic cop shows on television!). It's rather heartbreaking to imagine the young Father Peter Snow enduring the tortures of being hung and eviscerated during his execution--unlike the stylized portraits of the sixteenth century or the idealized images of the martyrs, the picture of him on the left is more realistic (if we believe the reconstruction). Mr. Grimston seems stalwart and, I guess, normal, balding and wrinkled. I can imagine him taking a swing at the pursuivants on the road to York, trying to fight them off to give Father Show a chance. They were beatified by Pope Saint John Paul II in 1987, among the Eighty-Five Martyrs of England and Wales.

When he beatified this group of priests and laymen, the pope described their unity in service, worship, doctrine, and prayer, which certainly describes the partnership between Blessed Peter Snow and Blessed Ralph Grimston:

Among these eighty-five martyrs we find priests and laymen, scholars and craftsmen. The oldest was in his eighties, and the youngest no more than twenty-four. There were among them a printer, a bartender, a stable-hand, a tailor. What unites them all is the sacrifice of their lives in the service of Christ their Lord.

The priests among them wished only to feed their people with the Bread of Life and with the Word of the Gospel. To do so meant risking their lives. But for them this price was small compared to the riches they could bring to their people in the Holy Sacrifice of the Mass.

The twenty-two laymen in this group of martyrs shared to the full the same love of the Eucharist. They, too, repeatedly risked their lives, working together with their priests, assisting, protecting and sheltering them. Laymen and priests worked together; together they stood on the scaffold and together welcomed death. Many women, too, not included today in this group of martyrs, suffered for their faith and died in prison. They have earned our undying admiration and remembrance.

These martyrs gave their lives for their loyalty to the authority of the Successor of Peter, who alone is Pastor of the whole flock. They also gave their lives for the unity of the Church, since they shared the Church’s fait, unaltered down the ages, that the Successor of Peter has been given the task of serving and ensuring "the unity of the flock of Christ". He has been given by Christ the particular role of confirming the faith of his brethren.

The martyrs grasped the importance of that Petrine ministry. They gave their lives rather than deny this truth of their faith. Over the centuries the Church in England, Wales and Scotland has drawn inspiration from these martyrs and continues in love of the Mass and in faithful adherence to the Bishop of Rome. The same loyalty and faithfulness to the Pope is demonstrated today whenever the work of renewal in the Church is carried out in accordance with the teachings of the Second Vatican Council and in communion with the universal Church.

Blessed Peter Snow and Blessed Ralph Grimston, pray for us!
Posted by Stephanie A. Mann at 1:00 AM