I said that when I finally was able to get a copy of the May issue of BBC History Magazine, I'd read and comment on the cover article by Joanne Paul on "Thomas More: Saint or Sinner?". I had to wait until the Friday of the long Memorial Day weekend to purchase my copy at our only Barnes & Noble in town.

As the subtitle on the cover states, Paul wants to depict "The real character of Henry VIII's controversial statesman". She begins with the dichotomy of saint and sinner, contrasting Catholic and Protestant views that are absolute. Paul cites R.W. Chambers and Robert Bolt as offering the modern Catholic interpretation of More as a saint (though neither of them was Catholic); Richard Marius, G.R. Elton, and Hilary Mantel as offering the modern Protestant interpretation of More as a villain (I don't know their confessional standings). The beginning and first few paragraphs of the article set out opposites: "flawless Catholic saint vs. cruel ogre"; "saintly scholar or stubborn zealot"; "self-righteous villain" and "saintly hero"; and then Paul offers an anodyne alternative: consider More as a "flesh-and-blood individual" as though that precludes sanctity or villainy. I know what she means, of course, but because the opposites are so extreme (and one of them is straw man), it seems weak to me as an alternative to the dictate: "We are told we must pick a side." I don't think that's where we should start at all. We should start with his life and times, not with a judgment as final as "saint or sinner?".

Joanne Paul follows the lead the of Richard Rex in his chapter for the Cambridge Companion to Thomas More (Chapter 5, "Thomas More and the heretics: statesman or fanatic?"). She proposes, for example, that More's prosecution of heresy cases as Chancellor and his writing of polemics attacking the heretics and apologetics defending Catholic Church teaching were part of his efforts to maintain unity and the common good: first in England, then in the Church, and then in Christendom. There is one odd line: "We cannot know how much of a personal hand More took in the fight against heresy in England." I think that Richard Rex and others have indicated how personally More took his fight against heresy in England--so much so that he wished his efforts were successful and therefore could be forgotten. 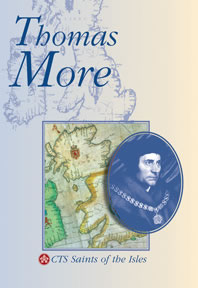 I mentioned that one of the alternatives is a straw man: the idea of a "flawless Catholic saint" and the tone of hagiography and the smell of incense in the biographies of Thomas More written by his proponents. Just reading the Catholic Truth Society pamphlet on St. Thomas More by Alvaro de Silva for the CTS Saints of the Isles series would show that's not the only view his admirers have of him. The Catholic Church does not require our saints to be perfect: if that were true, there would be only one saint: the Blessed Virgin Mary. More knew he was a sinner and that's why he spent his time in the Tower of London preparing for death, expiating his sins, and meditating on the Lord's Passion. Also, the sins of which More is accused today are according to modern, secular standards of tolerance and individual autonomy, and those standards will shift with time. Who knows of what sins our heroes will be accused in 400 or 500 years?

When I presented an "expert" talk for the Tudor Society, I also participated in a chat room, and this issue of Thomas More: Saint or Sinner came up. Discussing Catholic doctrine in almost twitter-length comments is difficult, and, of course, I thought of a good answer after the chat was over.

While those extreme views of Thomas More are deceiving and misleading, there is one set of choices that is not deceiving. For Catholics and Christians, there are two alternatives for eternal life: Heaven or Hell (remember that the Poor Souls in Purgatory are on their way to Heaven). Either Thomas More is in Heaven or Hell: the Catholic Church only proclaims that the dead are in Heaven; if someone condemns him to Hell (as a villain, zealot, or cruel ogre), he or she is taking on an authority that the Catholic Church has never dared to do. Jesus gave St. Peter and the Apostles authority on Earth and in Heaven; He never gave them authority over Hell and its denizens. The Catholic Church had every right to proclaim More a saint: reading his devotional works can't help but impress the reader that he loved Jesus and His Church; he died heroically dedicated to the unity of that Church: he is a martyr and a saint.
Posted by Stephanie A. Mann at 12:30 AM