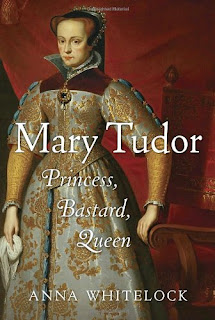 A year after the holy Cardinal Bishop of Rochester John Fisher suffered beheading on the block at Tower Hill, the Princess Mary sent a letter to her father that betrayed everything her mother Katherine of Aragon had fought for and the the good bishop had died for:

First I confess and acknowledge the king’s majesty to be my sovereign lord and king, in the imperial crown of this realm of England; and do submit myself to his highness and to each and every law and statute of this realm, as it becomes a true and faithful subject to do; which I shall also obey, keep, observe, advance and maintain according to my bounden duty with all the power, force and qualities with which God had endued me, during my life.

I do recognize, accept, take, repute and acknowledge the king’s highness to be supreme head on earth, under Christ, of the church of England; and do utterly refuse the bishop of Rome’s pretended authority, power and jurisdiction within this realm, formerly usurped, according to the laws and statutes made on that behalf, and by all the king’s true subjects humbly received, admitted, obeyed, kept and observed.

And I do also utterly renounce and forsake all manner of remedy, interest and advantage which I may by any means claim by the bishop of Rome’s laws, processes, jurisdiction or sentence, at this time or in any way hereafter, by any manner of title, colour, means or cause that is, shall or can be devised for that purpose.

I do freely, frankly and for the discharge of my duty towards God, the king’s highness and his laws, without other respect, recognize and acknowledge that the marriage formerly had between his majesty and my mother, the late princess dowager, was by God’s law and man’s law incestuous and unlawful.

From Hunsdon, this Thursday, at eleven of the clock at night.

Your Grace’s most humble and obedient daughter and handmaid, Mary.

Note how late at night she completed this letter.

Thus she accepted the title of bastard for herself, as the subtitle of Anna Whitelock's 2010 biography lists her titles in order: Princess, Bastard, Queen.

She regretted it for the rest of her life.
Posted by Stephanie A. Mann at 1:00 AM