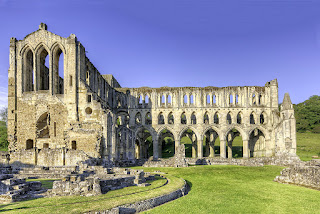 English Heritage just opened a new museum at Rievaulx Abbey, one of the great Cistercian monasteries of England, and the media are covering it with the theme of what Henry VIII's commissioners left behind as they ransacked the suppressed abbey. From the BBC:

Artefacts from an abbey destroyed by Henry VIII have gone on display for the first time in nearly 500 years.

The items at Rievaulx Abbey, near Helmsley, North Yorkshire, are being displayed following a £1.8m redevelopment by English Heritage.

Objects on display include a half-tonne lead bar stamped with Henry's emblem which is all that remains of the abbey's roofs and windows.

Rievaulx Abbey was destroyed by royal command in 1538.

Other exhibits include medieval stone carvings, chess pieces and gold coins that tell the story of the first Cistercian abbey in the north of England.

"It was a place of huge spiritual significance for the country and one utterly transformed by dramatic upheavals under Henry VIII."

The Telegraph story explains the significance of that lead bar:

It is all that remains of the abbey’s roof and windows, melted down and stamped as crown property, ready to add to the haul from the site.

Instead it remained were it was left for centuries until eventually being found under a pile of fallen rubble.

Historians believe it may have been trapped when the commissioners, in their haste to extract anything of value, caused part of the building to fall buring (sic) their haul beneath.

The Guardian describes the collapse of the tower:

It may have been the work of stripping the abbey of anything saleable – tomb ornaments, altar slabs, good timbers, metal, windows, cut stone – which destabilised the whole structure. The tower collapsed into the nave, burying the salvaged material that had been stacked up for removal, and the stretch of medieval tile paving beneath it. . . .

“There were no skeletons in the rubble so we think the collapse must have happened overnight,” said curator Susan Harrison. “It must have happened literally the night before they were going to take it all away, because it was all found stacked up neatly just inside the door, ready to be moved out.”

These ghostly pictures show monks returning to the derelict ruins of an abbey 500 years after it was pulled down by Henry VIII.

The men can be seen walking around the grounds of Rievaulx Abbey, near Helmsley in North Yorkshire, which was once one of the richest and most spiritually significant abbeys in England - before it was destroyed on the orders of the king and Thomas Cromwell in 1538.

The crumbling ruins - which were visited by Father Joseph and Brother Bernard - stand out as they sit against the leafy background of the North York Moors.

The Cistercian monks read from a 500-year-old prayer book as they wondered (sic) around the shell of the ancient building.

Image credit, under CC license from Wikipedia.
Posted by Stephanie A. Mann at 12:30 AM