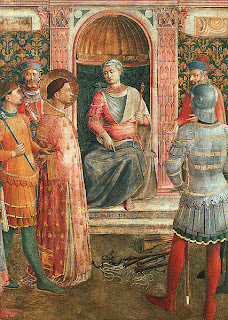 Since today is the feast of the great martyr St. Lawrence or St. Laurence, here are some links to now-Anglican churches built during the Middle Ages in England:

St. Laurence and All Saints in Eastwood, Essex.

St Laurence, Pittington is one of the most interesting mediaeval churches in the Diocese of Durham.

The present church building dates from around 1100, although there is evidence of fragments of an earlier, pre-Norman building. Throughout the centuries, St Laurence Church has provided a place of worship to the people of Hallgarth and Pittington. Now in the 21st century, we still aim to provide a place of worship, hospitality and service for our community.

Devotion to St. Laurence spread in England because of the devotion of the English to St. Peter and the saints of Rome during the early Middle Ages. Anglo-Saxon era bishops like Wilfred and Benedict Biscop brought back relics of the Roman saints and the popes sent relics to England. Pope Vitalian sent relics of St. Laurence to King Oswiu of Northumbria in the seventh century, for instance--at St. Laurence at Pittington:

Christians have worshipped here in this building, week by week from around 1100AD. It may well have been built on the site of an earlier wooden church. There has been a settlement here from early times; and it is even possible that St. Aidan came here during his extensive travels throughout Northumbria. Bede records that the Pope sent relics of St. Laurence (martyred in Rome 258AD) to Oswy, King of Northumbria in 667AD; this may give a hint as to the founding of an earlier church.

So that would have been from the Anglo-Saxon era, when the bonds between "England" and Rome were particularly strong!