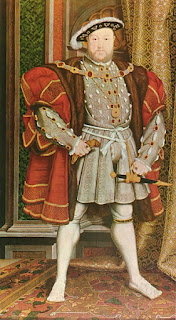 The British Library has purchased a volume of the Gospels with strong links to Britain's Catholic past--and how Henry VIII almost destroyed it all (almost):
The St Cuthbert Gospel was described by the British Library as having “beautifully-worked original red leather binding in excellent condition”. The library said it is “the only surviving high-status manuscript from this crucial period in British history to retain its original appearance, both inside and out”.
The Gospel was buried alongside St Cuthbert following his death on the island of Lindisfarne off the northeast coast of England. His coffin was transferred to nearby Durham as his community attempted to escape coastal Viking raids. His grave later became a pilgrimage site.
The Gospel was discovered when St Cuthbert’s coffin was opened 400 years after his death during the dedication of a shrine in his honor at Durham Cathedral.
It was kept in the cathedral priory but when King Henry VIII dissolved the monasteries during the Reformation the Gospel passed into the hands of a private collector in 1540.
By the 18th century, the book was in the possession of the 3rd Earl of Lichfield who gave it to Canon Thomas Phillips, who in turn presented it in 1769 to the Jesuits.
Read the rest of the article from The Catholic Herald here. The Jesuits will benefit from the sale because they can use the funds for good causes but the British people will benefit because they will be reminded of their Catholic Christian heritage. Like the exhibition on the reliquaries at the British Museum, the display of this volume at the British Library manifests that heritage vividly and concretely.
Posted by Stephanie A. Mann at 2:08 AM

Email ThisBlogThis!Share to TwitterShare to FacebookShare to Pinterest
Labels: dissolution of the monasteries, Henry VIII, St. Cuthbert, The Catholic Herald