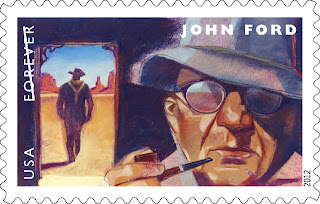 Completely off-topic, but it's MY blog, after all:
The American film director John Ford died on August 31, 1973. He directed many of my favorite movies, films that I can watch over and over again (just ask my husband!), enjoying both the familiarity of the story and the unique imagery and nuances I see anew each time. Elena-Maria Vidal pointed out his upcoming commemorative stamp on her blog, Tea at Trianon last week. She also posted this article one time about the themes in his movies.

How Green Was My Valley
The Quiet Man
The Searchers
Fort Apache
Rio Grande
She Wore a Yellow Ribbon
3 Godfathers
The Fugitive
Young Mr. Lincoln
The Long Grey Line
They Were Expendable
My Darling Clementine
Mogambo
The Horse Soldiers
The Man Who Shot Liberty Valance

I enjoy his sense of etiquette and order--like when Henry Fonda's martinet character berates John Agar ("Mr. Shirley Temple") in Ward Bond's quarters and the Sergeant reminds Fonda that he has violated the sanctity of his non-commissioned officer's quarters in Fort Apache. Since he was not invited he has no right to be there. But stiff-necked, stone-faced Fonda still has to start the dance with Mrs. O'Rourke before the battle with Cochise.

His movies reflect--almost always indirectly--on one of the greatest events in American history, the Civil War. Ford's westerns always have some echoes of the War between the States, just because the armies are made up of former Confederate and Union soldiers. The Horse Soldiers is the exception. Ford also reflects on the experience of Irish immigrants --Fonda's Thursday is uncomfortable with the all the Irish-Americans at Fort Apache, and his interference in the relationship between his daughter Philadelphia (Shirley Temple) and the O'Rourke is based on his bigotry. Somehow he did not know what the Irish had contributed to Union victory? And don't forget that he deals with bigotry against the Native American Indians in The Searchers and Cheyenne Autumn, too.

Ford's ability to frame a scene to reveal secrets in relationships--how his brother's wife caresses John Wayne's coat in The Searchers, then Wayne kisses her while Ward Bond stares straight ahead, eating his donut and drinking his coffee; John Wayne and Maureen O'Hara's embrace in The Quiet Man even though they are estranged by her desire for her dowry; Vera Miles placing the cactus rose on Tom Doniphan's bare casket (although you never see it--Ford just puts the scene together before your eyes by suggestion) in The Man Who Shot Liberty Valance; the women waiting to see who comes home from the battle with the Indians in Rio Grande--reminding us that Ford began as a silent movie director.

His use of music: Ken Curtis singing "I'll Take You Home, Kathleen" to Maureen O'Hara and John Wayne in Rio Grande ("This music is not of my choosing, Kathleen"; "I wish it had been, Kirby"); the dances; the priest Ward Bond singing a rather inappropriate song at the wedding in The Quiet Man; the Welsh choirs in How Green Was My Valley.

I think the author Anthony Burke Smith might sum up the reasons I like John Ford movies in his book The Look of Catholics: Portrayals in Popular Culture from the Great Depression to the Cold War. He points out that "while a filmmaker like John Ford rarely focused on clerics and the Church . . . his films gave a distinctly ethnic Catholic accent to his cinematic depictions of American community"; religion "is an unbroken thread running through the films of John Ford, providing his movies with some of their most compelling moments." Smith somewhat dismisses other studies of Ford's films that highlight the "sacramental imagination" demonstrated in the movies, but I think that aspect is also important. Ford's movies depict simple rituals, like the family dinner in How Green Was My Valley and the courtship rules in The Quiet Man as signs of holiness and sacredness.

And most of all, I love these films because my father loved them too. We would get together as a family on March 17 to eat baked potatoes, drink Irish whiskey (neat) and watch The Quiet Man.
Posted by Stephanie A. Mann at 2:12 AM