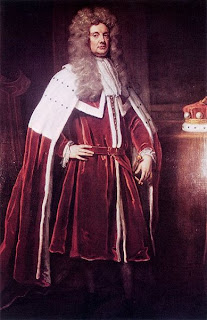 Grandson of George Calvert, First Baron Baltimore and son of Cecilius Calvert, Second Lord Baltimore, Charles Calvert was born on August 27, 1637. He would succeed his father as Governor of Maryland in 1675, but he would lose the colony after the Glorious Revolution of 1688. His son, Benedict Leonard, Fourth Baron Baltimore, would become an Anglican to regain the family claim to Maryland but died only two months after Charles in 1715. Benedict's son Charles (the Fifth) received the governorship of the colony back from King George I. Unfortunately, Charles the Fifth's son Frederick would be the Sixth and last Baron Baltimore.

But back to today's birthday boy: Charles Calvert's mother was Anne Arundell, whose father was Thomas Arundell, the First Baron of Wardour, a Catholic nobleman who endured imprisonment and suspicion for his faith during Elizabeth I's reign. Charles' grandfather had reverted to the Catholicism of his youth when he resigned as King James I's Secretary of State in 1625 and then began the process of founding a colony on the North American continent that would allow religious freedom. His father Cecilius would implement that vision and Charles struggled to keep it alive.

John D. Krugler, writing about Charles Calvert's vissicitudes in Maryland in his book English and Catholic: The Lords Baltimore in the Seventeenth Century, notes that the Third Lord Baltimore was just not the diplomat and leader his father and grandfather had been. He may have been too complacent about the success of religious toleration and Catholicism in Maryland. What destroyed the great Maryland experiment in religious freedom was not Calvert's complacency, however, but England's anti-Catholicism. After the Glorious Revolution of 1688, the Anglicans in Maryland staged a coup, William and Mary took over the colony, and the Church of England became the official state church. Catholics were not permitted the freedom to worship and the usual round of penal laws imposed. Sad ending to a successful, though always delicate, effort to take the state out of the individual's choice of church and religion.
Posted by Stephanie A. Mann at 2:00 AM