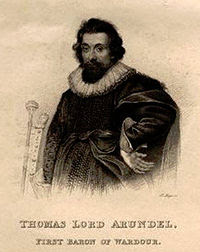 August 28, 1588 was busy day for executioners throughout London, as several new gibbets had been constructed. With the defeat or failure of the Spanish Armada, government officials sought to make quite an example.

According to most accounts of the Spanish Armada I've read, Catholics in England were opposed to a foreign invasion and helped with defense of their homeland with as much enthusiasm as any Anglicans. Catholics in exile, especially Cardinal William Allen and Father Robert Persons or Parsons had encouraged the effort, but not Catholics at home. Sir Thomas Arundell, First Baron of Wardour (pictured above) for example was known as a fervent Catholic and was even imprisoned for his faith in 1580. He gave 100 pounds to the government to assist in the defense of England against the Armada.

Nevertheless, here are those who suffered on August 28 in London at Tyburn, Mile End, Lincoln's Inn Field, Islesworth, Clerkenwell, and near the Theatre:

These martyrs are part of a group called the Martyrs of London of 1588. On August 30, the government repeated the process with another group of martyrs, including St. Margaret Ward. And then again in early October there would be more. All had been found guilty under the statutes that made the presence of a Catholic priest in England an act of treason and the assistance of a Catholic priest a felony.
Posted by Stephanie A. Mann at 2:08 AM