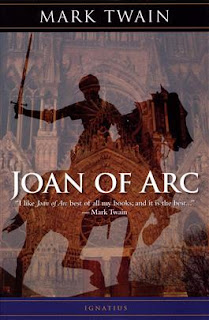 Samuel L. Clemens had no respect for organized religion nor for the Catholic Church, yet he loved the Maid of Orleans, St. Joan of Arc. Unlike G.B. Shaw, who wrote about St. Joan of Arc to make political points and even to mock the Church's canonization of her whom an (English) ecclesiastical court had condemned as a heretic, Clemens focused on St. Joan's character, which he admired. For example, he wrote, as Mark Twain:

Great as she was in so many ways, she was perhaps even greatest of all in the lofty things just named -- her patient endurance, her steadfastness, her granite fortitude. We may not hope to easily find her mate and twin in these majestic qualities; where we lift our eyes highest we find only a strange and curious contrast -- there in the captive eagle beating his broken wings on the Rock of Saint Helena [Napoleon Bonaparte]. . . .

He even acknowledged and admired the depth of her faith, without skepticism or much difficulty, because he trusted her:

She was deeply religious, and believed that she had daily speech with angels; that she saw them face to face, and that they counselled her, comforted and heartened her, and brought commands to her direct from God. She had a childlike faith in the heavenly origin of her apparitions and her Voices, and not any threat of any form of death was able to frighten it out of her loyal heart. She was a beautiful and simple and lovable character. In the records of the Trials this comes out in clear and shining detail. She was gentle and winning and affectionate, she loved her home and friends and her village life; she was miserable in the presence of pain and suffering; she was full of compassion: on the field of her most splendid victory she forgot her triumphs to hold in her lap the head of a dying enemy and comfort his passing spirit with pitying words; in an age when it was common to slaughter prisoners she stood dauntless between hers and harm, and saved them alive; she was forgiving, generous, unselfish, magnanimous; she was pure from all spot or stain of baseness.

And Twain concludes with this remarkable statement, one which I would make of no one of my acquaintance, dead or alive:

There is no blemish in that rounded and beautiful character.

As Ignatius Press comments on their website about the novel he wrote about his heroine:

Very few people know that Mark Twain (Samuel Clemens) wrote a major work on Joan of Arc. Still fewer know that he considered it not only his most important but also his best work. He spent twelve years in research and many months in France doing archival work and then made several attempts until he felt he finally had the story he wanted to tell. He reached his conclusion about Joan's unique place in history only after studying in detail accounts written by both sides, the French and the English.

Because of Mark Twain's antipathy to institutional religion, one might expect an anti-Catholic bias toward Joan or at least toward the bishops and theologians who condemned her. Instead one finds a remarkably accurate biography of the life and mission of Joan of Arc told by one of this country's greatest storytellers. The very fact that Mark Twain wrote this book and wrote it the way he did is a powerful testimony to the attractive power of the Catholic Church's saints. This is a book that really will inform and inspire.

“ I like Joan of Arc best of all my books; and it is the best; I know it perfectly well. And besides, it furnished me seven times the pleasure afforded me by any of the others; twelve years of preparation, and two years of writing. The others needed no preparation and got none.”--— Mark Twain 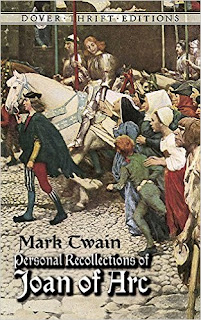 You may also read the book online here. I read the novel many years ago in the Dover Thrift edition and was amazed by its verisimilitude and historical accuracy. When my husband and I were going often to Paris I enjoyed seeing all the statues of St. Joan of Arc in the churches and in the squares of that glorious city. They were often positioned near the lists of the young men from the parish who died in World War I.

My husband and I took a day trip to Rouen, visiting the site of her martyrdom, the shrine church built there in her honor, the great abbey church in which she was rehabilitated by the by the Church, and the great Cathedral of Notre Dame. You can see the interiors of each of these edifices on the tourism page for Rouen,individually linked above: les visites virtuelles!
Posted by Stephanie A. Mann at 1:00 AM