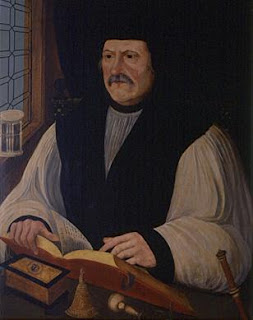 Matthew Parker, Elizabeth I's first Archbishop of Canterbury, and formerly one of Anne Boleyn's chaplains, died on May 17, 1575. In 1574 he gave his library, including a collection of books and manuscripts from the monasteries dissolved from 1536 to 1540, to Corpus Christi College at the University of Cambridge. According to this website:

Matthew Parker (1504-75) was a powerful figure of the English Reformation who was largely responsible for the Church of England as a national institution. Parker's talents were sought by both Henry VIII and Elizabeth I. He served as chaplain to Anne Boleyn and proved himself a capable administrator, becoming Master of Corpus Christi College (1544-53), Vice-Chancellor of Cambridge University, and Archbishop of Canterbury (1559-75). A benefactor to the University of Cambridge, Parker's greatest tangible legacy is his library of manuscripts and early printed books entrusted to Corpus Christi College in 1574. He was an avid book collector, salvaging medieval manuscripts dispersed at the dissolution of the monasteries; he was particularly keen to preserve materials relating to Anglo-Saxon England, motivated by his search for evidence of an ancient English-speaking Church independent of Rome. The extraordinary collection of documents that resulted from his efforts is still housed at Corpus Christi College, and consists of items spanning from the sixth-century Gospels of St. Augustine to sixteenth-century records relating to the English Reformation.

The Parker Library's holdings of Old English texts account for a substantial proportion of all extant manuscripts in Anglo-Saxon, including the earliest copy of the Anglo-Saxon Chronicle (c. 890), unique copies of Old English poems and other texts, and King Alfred's translation of Gregory the Great's Pastoral Care. The Parker Library also contains key Anglo-Norman and Middle English texts ranging from the Ancrene Wisse and the Brut Chronicle to one of the finest copies of Chaucer's Troilus and Criseyde. Other subjects represented in the collection are theology, music, medieval travelogues and maps, apocalypses, bestiaries, royal ceremonies, historical chronicles and Bibles. The Parker Library holds a magnificent collection of English illuminated manuscripts, such as the Bury and Dover Bibles (c. 1135 and c. 1150) and the Chronica maiora by Matthew Paris (c. 1230-50). Scholars in a variety of disciplines - including historians of art, music, science, literature, politics and religion - find invaluable resources in the Library's collection.

More biographical information here, at his alma mater.
Posted by Stephanie A. Mann at 12:30 AM

Email ThisBlogThis!Share to TwitterShare to FacebookShare to Pinterest
Labels: Archbishop of Canterbury, Church of England, Corpus Christi College, Elizabeth I, Libraries, Matthew Parker, The Dissolution of the Monasteries, The University of Cambridge