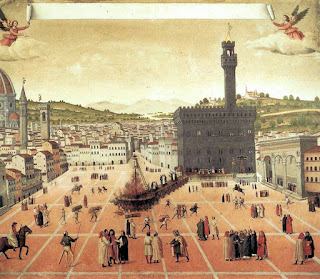 Girolamo Savonarola was executed in the main square of Florence on May 23, 1498--it was a brutal execution that came after the Dominican friar had been tortured. He and his companions were stripped of their habits and hung by the neck above fires lit to burn their bodies. Their ashes were scattered in the Arno.
Savonarola was a hero to St. Philip Neri, as he had studied at the convent of San Marco (St. Mark's). Blessed John Henry Newman wrote about his patron's admiration of the Florentine friar in the two sermons he preached at the Oratory in Birmingham in 1848.
First, describing Savonarola:
A true son of St. Dominic, in energy, in severity of life, in contempt of merely secular learning, a forerunner of the Dominican St. Pius [V] in boldness, in resoluteness, in zeal for the honour of the House of God, and for the restoration of holy discipline, Savonarola felt "his spirit stirred up within him," like another Paul, when he came to that beautiful home of genius and philosophy; for he found Florence, like another Athens, "wholly given to idolatry." He groaned within him, and was troubled, and refused consolation, when he beheld a Christian court and people priding itself on its material greatness, its intellectual gifts, and its social refinement, while it abandoned itself to luxury, to feast and song and revel, to fine shows and splendid apparel, to an impure poetry, to a depraved and sensual character of art, to heathen speculations, and to forbidden, superstitious practices. His vehement spirit could not be restrained, and got the better of him, and—unlike the Apostle, whose prudence, gentleness, love of his kind, and human accomplishments are nowhere more happily shown than in his speech to the Athenians —he burst forth into a whirlwind of indignation and invective against all that he found in Florence, and condemned the whole established system, and all who took part of it, high and low, prince or prelate, ecclesiastic or layman, with a pitiless rigour,—which for the moment certainly did a great deal more than St. Paul was able to do at the Areopagus; for St. Paul made only one or two converts there, and departed, whereas Savonarola had great immediate success, frightened and abashed the offenders, rallied round him the better disposed, and elicited and developed whatever there was of piety, whether in the multitude or in the upper class.

It was the truth of his cause, the earnestness of his convictions, the singleness of his aims, the impartiality of his censures, the intrepidity of his menaces, which constituted the secret of his success. Yet a less worthy motive lent its aid; men crowded round a pulpit, from which others were attacked as well as themselves. The humbler offender was pleased to be told that crime was a leveller of ranks, and to find that he thus was a gainer in the common demoralization. The laity bore to be denounced, when the clergy were not spared; and the rich and noble suffered a declamation which did not stop short of the sacred Chair of St. Peter. . . .

A very wonderful man, you will allow, my Brethren, was this Savonarola. I shall say nothing more of him, except what was the issue of his reforms. For years, as I have said, he had his own way; at length, his innocence, sincerity, and zeal were the ruin of his humility. He presumed; he exalted himself against a power which none can assail without misfortune. He put himself in opposition to the Holy See, and, as some say, disobeyed its injunctions. Reform is not wrought out by disobedience; this was not the way to be the Apostle either of Florence or of Rome. Then trouble came upon him, a great reaction ensued; his enemies got the upper hand; he went into extravagances himself; the people deserted him; he was put to death, strangled, hung on a gibbet, and then burned in the very square where he had set fire to the costly furniture of vanity and sin.
And then of St. Philip Neri's connection to Savonarola:
Philip was born in Florence within twenty years after [Savonarola]. The memory of the heroic friar was then still fresh in the minds of men, who would be talking familiarly of him to the younger generation,—of the scenes which their own eyes had witnessed, and of the deeds of penance which they had done at his bidding. Especially vivid would the recollections of him be in the convent of St. Mark; for there was his cell, there the garden where he walked up and down in meditation, and refused to notice the great prince of the day; there would be his crucifix, his habit, his discipline, his books, and whatever had once been his. Now, it so happened, St. Philip was a child of this very convent; here he received his first religious instruction, and in after times  he used to say, "Whatever there was of good in me, when I was young, I owed it to the Fathers of St. Mark's, in Florence." For Savonarola he retained a singular affection all through his life; he kept his picture in his room, and about the year 1560, when the question came before Popes Paul IV. and Pius IV., of the condemnation of Savonarola's teaching, he interceded fervently and successfully in his behalf before the Blessed Sacrament, exposed on the occasion in the Dominican church at Rome. 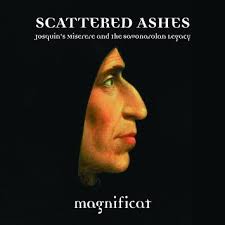 There's a new CD from Magnificat (directed by Philip Cave) of music inspired by Savonarola: Scattered Ashes: Josquin's Miserere and the Savonarolan Legacy. You can listen/watch a sample of this recording here. According to Linn Records:

The liner notes for the CD are here, including details about how Savonarola wrote a meditation on Psalm 50/51 and began one on Psalm 30/31 and how different composers wrote settings of those psalms or the friar's meditations. Among the works including on the recording is William Byrd's Infelix Ego and the author of the liner notes, Patrick Macey, invokes the specter of persecution of Catholics in Elizabethan England and how "Byrd's setting of Savonarola's meditation must have given voice to their sense of persecution, as well as their hope in the Lord's mercy." Note that Patrick Macey wrote an Oxford monograph of Savonarola's musical influence published in 1998 but out of print now, with the evocative title Bonfire Songs:

An underground tradition of sacred songs--Italian laude--thrived in Italy during the sixteenth century. The texts of many were written by the condemned heretic Fra Girolamo Savonarola, who was burned at the stake in Florence in 1498. This study explores the religious and social functions of these laudeduring Savonarola's time in Florence. It also reconstructs music for laude written to venerate the friar after his death. Savonarola's meditations on Psalms 30 and 50 were also set to music as motets by some of the leading composers of the 16th century, in a style of "high art" music remarkably distinct from the more popular tone of the lauda. These complex motets were often the result of networks of patronage at courts in Ferrara, France, and England. The book includes a CD with a generous selection of performances of the music discussed.

Remember that the Italian Laude were also incorporated into St. Philip Neri's Oratorian meditations, as just cited in the oratorio by Alessandro Scarlatti that I just reviewed.
Posted by Stephanie A. Mann at 12:30 AM