Morrison on Imitation and Reform: Some Notes on Newman 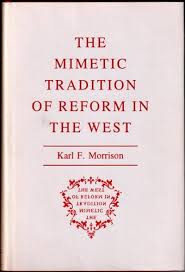 Reading this by Peter Kwasniewski on the New Liturgical Movement website reminded me of Karl F. Morrison's great book, The Mimetic Tradition of Reform in The West:

One cannot go back in the sense of re-living or re-creating the past as past, but one can and must always be reaching into the past for inspiration, for tried and true models, for a trustworthy way of life. One looks to the past in order to bring something of its fire and spirit into the present moment and into every future generation. To think that we are uniquely stranded in our age, cut off from the beneficent and fertilizing influence of tradition, is a peculiarly modern form of pride and even, perhaps, a subtle form of vanity. We want to view ourselves as different from every former age and therefore as freed from our obligations to our predecessors — the fundamental obligation of grateful receptivity that every Christian generation owes to its inheritance. To think that we must forge ahead on a new path that is not in continuity with the past is a pernicious error, actually a denial of our creaturely dependence on all the causes that made us what we are and continue to make us what we are. . . .

It is not without significance that, throughout the history of the Church, reform movements always look back: they look to the apostolic age (as when religious orders conscientiously model their way of life after the blueprint given in the Acts of the Apostles); they look back to the origins of monasticism in the desert or the wilderness; they look back to the spirit and rule of their founders; they appeal to the Church Fathers, the Councils, the annals of the saints. It is part of the very essence of Christianity to be looking both backwards and forwards — indeed, paradoxically, to look to the future only through the past. This is what is meant by “the binding force of Tradition,” which liberates those it binds from the fads and fashions of their own particular age and its blind spots or prejudices. For a genuine Catholic, it could never be legitimate to lay aside vast portions of inherited tradition—be it artistic, intellectual, liturgical, or what have you.

Yes, it is possible to enhance the vast treasury we inherit, but we do so by augmenting it, not by suppressing, dismantling, or destroying its contents, or considering them impossibly distant and irrecoverable. There may be times when some component of our Christian life needs to be modified, but this will be done rarely, reverently, and conservatively. New things will emerge out of old things, in a manner that is gentle and organic, not violent or mechanistic or self-punishing.

Karl F. Morrison's The Mimetic Tradition of Reform in The West is still available from Princeton University Press, but only as a print-on-demand volume. The description on the press website is woefully inadequate:

Ancient writers distinguished between art and style, arguing that free imitation was a critical strategy that freed artists from servile copying of objects and blind submission to rules of style. In this study Karl F. Morrison explores the far-reaching consequences of this distinction.

You may see the Table of Contents here to glimpse how far reaching the "consequences of this distinction" are. Fortunately, I still have my hardback copy of Morrison's great work (my brother gave it to me for my birthday in 1992). It's one of those books like E.R. Curtius's European Literature and the Latin Middle Ages or Erich Auerbach's Mimesis: The Representation of Reality in Western Literature (both also published by Princeton!) which survey a vast range of history and organize it conceptually. Morrison's achievement is even greater because he does not limit himself to the discussion of literature, but applies the concepts of imitation and reform to religion, philosophy, history, education, and society. He mentions Auerbach's Mimesis in the "Appendix: Thinking Mimetically about History: Some Bibliographical Orientations", and notes the limitation of that effort to literature.

I certainly haven't reread the book for this post, but I did scan the pages on which Morrison discusses the career of John Henry Cardinal Newman, noting the seeds of the failure of the Catholic University of Ireland in Newman's discourses on The Idea of a University. Morrison notes that Newman's theology of the development of doctrine and his emphasis on the national (Protestant) Literature of England, and how important both were in the education of a gentlemen according to the national (Protestant) character of England created great distrust among the Irish clergy. Morrison also goes on to address Newman's conflict with the theological milieu of Catholicism during the reign of Pope Pius IX--with the Cardinal's hat from Pope Leo XIII as a rescue of his reputation--even suggesting a conflict between Newman's biglietto speech against liberalism in religion and his own theological theories of what Morrison calls "mimesis by augmentation" and discontinuity in religious doctrine. Morrison's view of Newman seemed to be a misreading when I first read the book and its does now too. If Morrison had read Newman's sermons and letters he would have understood Newman's dedication to doctrine and tradition.
Posted by Stephanie A. Mann at 12:30 AM